"Hunters" are a group of human-animal hybrids which were genetically-engineered as biological weapons. Hunter species were created through the grafting of reptilian donor DNA to a fertilized human embryo with the aid of the t-Virus as a bonding agent, with the exception of the Hunter γ, which reversed the process with human DNA grafted into the genome of fertilized amphibian spawn. The Hunters were one of Umbrella's more successful products and among their oldest, having entered production with the Hunter α in the 1980s. Following Umbrella's demise, other bio-weapon manufacturers used the research data to create new Hunter species, with the Farfarello being among the latest iterations.

In Umbrella's earlier years, the business strategy of its co-founder, Oswell E. Spencer, was the engineering of viral strains of Progenitor (collectively dubbed "t-Virus") to be used as profitable weapons, with funds raised going to the Wesker Project. Until the 1980s, t-Virus research was pioneered independently by Umbrella's three founders and their labs. The t-Virus present at the Arklay Laboratory in 1978, known as "Alpha", had a 90% chance of killing those infected. While this fits perfectly as a military weapon, the chances of it spreading far were not satisfactory. Consequently, Dr. William Birkin's team spliced Alpha with genes from Ebola Virus.[1] This new t-Virus, known as Beta, was completed by 1981, and instead kept the infected alive and in such a state they would unconsciously kill or infect others. The downside was that statistically 10% of a population would still be immune, and could avoid the walking infected. Under pressure from Spencer to find a solution to the problem, Birkin steered weapons research towards creating new species that would kill the survivors. The Hunter Project was born.[2]

In the 1990s, work was undertaken by other laboratories to improve upon Birkin's creation. After the 1998 "Mansion Incident", "α" embryos were further altered to improve their reaction times for combat.[3][excerpt 1] However, the resulting "β" species were weaker and blind in one eye due to uncontrolled tumor growths. Umbrella Europe's "γ" went into a new direction through the use of amphibian-human hybrids, but could only be of use near bodies of water.[4][excerpt 2] Others developed in this era were the "R", "μ", "Elite" the "Ticks" and the δ which was the last model created before the company’s collapse in 2003.

In addition to these models intentionally developed by Umbrella, there was also one model whose genesis was totally accidental. Due to the management at Umbrella’s Atlantic waste disposal facility neglecting worker safety in favor of accelerating research a batch of what appeared to be γ hunters somehow mutated and escaped into the flooded lower sections of the island complex, where they successfully resisted all of Umbrella’s attempt to dislodge them. Known as Gimmers due to their luminescent red eyes, the new creatures were far more sensitive to the light than their ancestors but gained the ability to vomit a powerful acid on their opponents.[5] This subtype was subsequently rendered extinct when the facility was destroyed in 2002.

Umbrella's rival company meanwhile developed the "Hunter II", a more intelligent version of the "α" model that could track down its target through an automated surveillance device. This company also created the "Sweeper", a poisonous Hunter with reddish skin.

The Italian bioterrorist group Il Veltro would later gain possession of a mass-produced third-party Hunter model similar in design to the Hunter II. A variant of this model infected with t-Abyss was created by 2005 and was called Farfarello. This model was able to be able to turn its body transparent effectively making it invisible, but at the cost of it being far more aggressive and difficult to control. 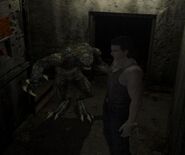 Hunter α in RE0

Hunter α in RE1 attacking Chris 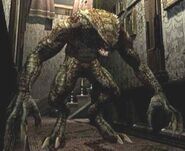 Hunter β in RE3 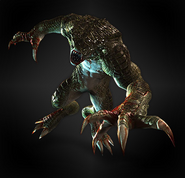 The Hunter in Revelations 2 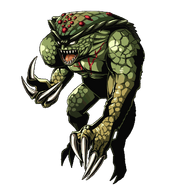