The Hunter μ was a smaller version of the Hunter R. Several were held in storage in Raccoon City.

This Hunter has exactly the same attacks and fire-power resistance of the larger Hunter R. It may have been designed for an easy to store Hunter that could be delivered in larger quantities.

They were also a sizeable threat to the survivors hiding in the above-ground facility until Carter, an Umbrella researcher, released the Tyrant R to finally rid the facility of the creatures. 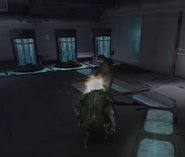 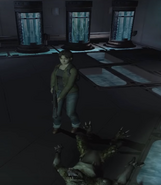 "μ," pronounced "mu", is used to symbolize the word "micro"; this references their small size.