Il Veltro (Italian for "The Greyhound") was an international terrorist organization. Its members all wore gas masks, concealing their true identities. Their name and slogan ("infin che'l veltro verrà, che la farà morir con doglia." or "until the Greyhound comes, who shall make her perish in her pain.") refers to a speech in Dante Alighieri's "Inferno" where the poet Vergil tells Dante how the she-wolf from the poem's beginning will be dealt with.

Il Veltro was formed under the charisma of Dr. Jack Norman, and has been described as an "armed cult".[1][excerpt 1][2][excerpt 2] An Italian nationalist group, Veltro was opposed to the European Union's construction of Terragrigia, a self-sustaining city on the Mediterranean coastline. The core element of their belief was the moral corruption of modern society, that Veltro was predestined to fight this evil, and that those not sharing Veltro's views were predestined to suffer.[3][4]

Sometime before Summer 2004, Veltro was approached by the Federal Bioterrorism Commission's Commissioner, Morgan Lansdale, who had himself concocted a plot to expand the FBC's powers to deal with terrorism by inciting a disaster in which to fight. Norman accepted the offer, and was provided with equipment to ensure the city's destruction, sending over three luxury passenger ships as transport;[3] Hunter B.O.W.s to attack civilians on the ground, and UAVs to disperse the t-Abyss Virus above. The attack was a success, but after five days Lansdale saw no further use for Veltro and remotely released the virus on board the three ships to eliminate the terror group.[5] Norman himself, who survived the spread on Queen Dido, protested his betrayal in a phone call to Lansdale; a bomb was set off on board to sink the ship to silence him, while Queen Zenobia and Queen Semiramis were captured and taken out to sea as the city was destroyed by Regia Solis.[6][7] Norman and a dozen militants survived for a year in a sealed compartment of the ship, dying one-by-one until only Norman was left alive. After the FBC attempted to board the ship and seize a PDA implicating Lansdale, Norman infected himself with t-Abyss. He was eventually killed by BSAA members Chris Redfield and Jill Valentine, both of whom had also been sent to retrieve the information.

Many members of Veltro that died on the Queen Dido were infected and upon death, visible signs of transformation into either Ooze or Globster could be seen. Their mutation suggests that those two mutations are varying steps of mutations, similar to Crimson Head and Licker. 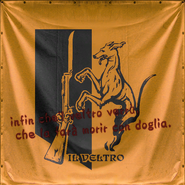 The uniform of a Veltro agent. 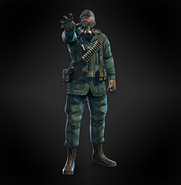 A Veltro agent imposter on board the Queen Zenobia.