The Iluzja is seen by Chris Redfield, Piers Nivans and several other B.S.A.A. operatives while in Lanshiang, China, seemingly primarily in the inner Poisawan area. Its name is derived from the Serbo-Croatian iluzija and Polish iluzja, meaning "illusion."

The Iluzja closely resembles a serpent in its body shape and mannerisms and seems to be the improved version of Yawn. Little is known about it as of yet, though considering its size it is at least strong enough to easily fling an average-sized human male with great force. Instead of two primary fangs, the Iluzja seems to have a line of thick fangs along its maw, that bend outwards as it opens its mouth.

The most threatening ability of the Iluzja is its ability to blend in near-seamlessly with its surroundings. While camouflaged, the snake is nearly impossible to see, only providing a vague ripple of its body wherever it moves. The one thing that gives it away is the inside of its mouth becoming completely visible when it opens to prepare for an attack.

True to the nature of its abilities, the Iluzja seems to primarily be a stealth-based attacker. It uses its camouflage ability to hide from its prey as it circles around and stalks them, waiting for the opportunity to attack. The Iluzja will open its mouth wide, giving its location away briefly, before it strikes. Although this is a sure sign, sometimes it is not as easily noticeable as it will sometimes attack from above as well.

The Iluzja will also go through walls or where applicable up from under its prey to attack. It demonstrates enough strength to easily smash its head through a floor-ceiling to strike downwards at a target.[1] Its primary mode of attacking is to snap its jaws down upon its prey to drag them away, though it has also been seen that it uses its large body to constrict its prey.

Iluzja before revealing itself.

Iluzja grabbing a B.S.A.A. operative as he rappels down a rope.

Iluzja crashing through a ceiling to grab a B.S.A.A. operative.

Iluzja after being thrown off of Chris. 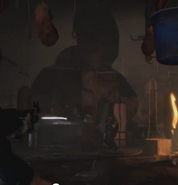 Iluzja about to go into its camo.

Retrieved from "https://residentevil.fandom.com/wiki/Iluzija?oldid=263193"
Community content is available under CC-BY-SA unless otherwise noted.