Ironhead is an enemy encountered by Claire Redfield and Moira Burton on Sejm Island in Resident Evil: Revelations 2.

Ironheads are Afflicted that have been subjected to further enhancements, increasing their size and strength. They stand a head taller than regular Afflicted and are considerably more durable, being able to absorb much more gunfire. Their most distinguishing feature is the metal helmet they wear, hence the name "Ironheads". This helmet is completely bulletproof and appears to have been welded onto the creature's face. Whilst this renders them immune to headshots, they are vulnerable at the base of their neck.

There are two variations of Ironheads. The first variation wears a faceplate similar to a Gas Mask. The other wears a conical-shaped helmet. Both variants wield crudely constructed axes that are capable of inflicting bleeding damage.

The best way to take care of Ironheads is to use exploding or firebomb bottles. If you are using some sort of firearm, avoid headshots from the front as their iron helmet protects their face, instead shoot beneath their masks or on their exposed chest. If you have plenty of room to maneuver and want to conserve ammo, Moira can also be utilized to stun Ironheads with her flashlight (although this takes notably longer than standard Afflicted) and attack with melee combos. Ironheads tend to charge Moira if she's close enough with her light, so be prepared to dodge.

Ironheads are also vulnerable to stealth ambushes, despite their size. Another quick way to take them out without expending ammunition is to either sneak up behind them or throw a smoke grenade their way if discovered, then stealth kills them from behind.

Being moderately slow, they can be easily killed from a distance, but being a defensive oriented creature, they have a lot of health so the best solution is avoiding them unless absolutely necessary. If you can evade their swing in close quarters, they momentarily expose the back of their head, a critical weak point.

Moira being attacked by an Ironhead. 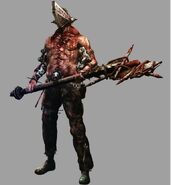 Ironhead card in Deadman's Cross.
Add a photo to this gallery

Retrieved from "https://residentevil.fandom.com/wiki/Ironhead?oldid=809170"
Community content is available under CC-BY-SA unless otherwise noted.