When a modified Epsilon strain of t-Virus contaminated Raccoon City's drinking water in what became known as the Raccoon City Destruction Incident, Isaac assisted the Raccoon Police Department in rescue efforts following the bombing of Main Street. Returning to the Raccoon General Hospital, he mutated into a Zombie, either from drinking the water or being attacked.

Isaac is unlocked by beating "The Hive" with any character, and is part of a set including Howard and Ethan. The set costs 6,000 points to unlock.[1] As this set only costs 600 points in Resident Evil Outbreak File #2,[2] players with both games can use "Data Convert" to buy him in File #2 and transfer him to Resident Evil Outbreak without even having to play "The Hive".

A second version of Isaac which appears in "The Hive" as a Zombie can be unlocked through the use of hacking. However, it lacks proper stats as it was never meant to be played, and as with other hacked Zombies has a very slow running speed and is unable to damage enemies, requiring further modification to be playable.

Isaac is a George-type character with a health value of 2600–3000. His virus rage runs at 0.91% per minute. He runs at 3% slower than the default speed, and makes up for it in having a 13% higher-than-default strength. Isaac starts in "FINE" and starts games with a Hemostat in his inventory.[3] 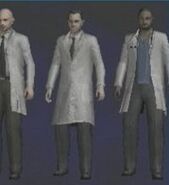 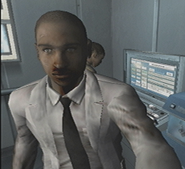 Another Zombie Issac image.
Add a photo to this gallery

Retrieved from "https://residentevil.fandom.com/wiki/Isaac?oldid=811388"
Community content is available under CC-BY-SA unless otherwise noted.