Bodyguard
An Ivan (イワン, Iwan?) is a specially re-engineered derivation of the T-103 Tyrant line designed by Umbrella to serve as a bodyguard of Colonel Sergei Vladimir.[1] One Ivan was used in an attempt to kill Albert Wesker in the Umbrella Executive Training School where Colonel Vladimir ordered it to punish him for his failure and disobedience. During the fight there was an explosion that distracted the Ivan, allowing Wesker to escape from it. This Ivan was later seen defeating a pack of Cerberus and carrying an unconscious T-A.L.O.S. away from the mansion with Sergei by its side. In 2003, both of the existing Ivans were ordered by Sergei to kill Wesker due to his intrusion and betrayal in the Caucasus facility. However the Ivan were no match for Wesker's superhuman abilities, and both of them were easily killed.

Similarly to the original T-103, the Ivans wear a protective coat with black gloves, complete with boots. The color schemes differ, however: the Ivans' coats are white and their boots are white with black shoelaces, while the T-103's are green. They also wear wrap-around sunglasses that include a head-mounted display.[2]

Their basic combat functionality was similar to that of a T-103, but modified to be better at assimilating into human society. Major improvements with this model include comprehension of human language,[1] the ability to actually pass as a human and complicated firearms training. However, it is still a model T-103 derivative and, as such, it can transform into its Super Tyrant form after being fatally damaged.[2] 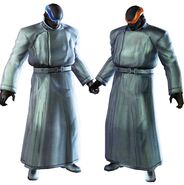 One of the two Ivans, the blue one. 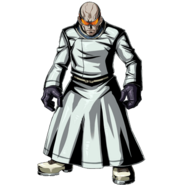