Ivan Judanovich was a citizen of the Eastern Slav Republic. He was a crucial leader for the anti-government forces during the country's Civil War until he and the entire rebel leadership were eliminated.

Judanovich was born to a Cossack family in the Soviet Union. After the breakup in the early 1990s, he became an influential political figure for one region which called for independence from the newly formed Eastern Slav Republic over irrecoverable socio-economic differences. When the government offered regional autonomy in exchange for ceasefire, the unrest quickly ended and Judanovich was made their leader, now known simply as the Ataman (a term given to Cossack leaders).[2][excerpt 1]

Some time after the unrest, it was discovered the autonomous region contained large oil supplies. Fighting restarted when the republic's oligarchs attempted to claim it for themselves. Judanovich quickly took charge in a civil war, now intent on moving the fighting to the capital of Holigrad and overthrowing the president, Svetlana Belikova.[3] Unaware of a secret plot by the President to destroy the leadership, Judanovich and the others accepted modified Dominant species Plagas which would allow them to control parasitised Licker B.O.W.s. Eventually the Plaga began to resist him and take control, forcing his euthanising. 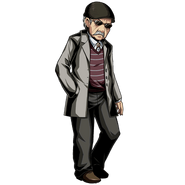 art from Minna to BIOHAZARD Clan Master.
Add a photo to this gallery

Retrieved from "https://residentevil.fandom.com/wiki/Ivan_Judanovich?oldid=823349"
Community content is available under CC-BY-SA unless otherwise noted.