"Ivy" is an action figure produced by Japanese toy manufacturer, Moby Dick, as part of their "BIOHAZARD REAL SHOCK ACTION FIGURE" line. It is based on the poisonous variant of the Plant 43 enemy from Resident Evil 2. This figure comes with one of the ribs for the Nemesis (Type-3) toy, who's parts were collected with each toy.

This figure stands about 8 inches tall and features rotation articulation in the hips, shoulders, knees, base of the head, and waist. ball joint rotation is used on the Pistil and the Stamens located between the petals as well as the "toes". In addition the creature's "arms" and the tentacles attached to them are made of a poseable rubbery plastic with a metal bar inside. Unfortunately, there probably won't be many poses this figure can do because the front of its body makes it incredibly heavy compared to the back, without the support of the arms to hold it up and keep it from falling forward. 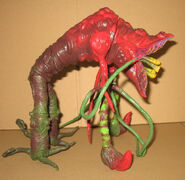 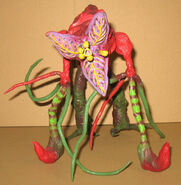 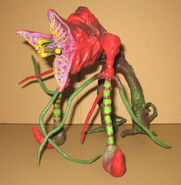 Close Up 2
Add a photo to this gallery

Retrieved from "https://residentevil.fandom.com/wiki/Ivy_(Moby_Dick_figure)?oldid=784535"
Community content is available under CC-BY-SA unless otherwise noted.