J'avo (ジュアヴォ, Juavo?) are a class of mutant humans created from the injection of C-Virus into the bloodstream. Unlike the Zombies, created by inhaling fumes loaded with C-Virus, J'avo maintains their intelligence. The name, J'avo, and the names of their various mutations are derived from Serbian words as decided by the BSAA European branch's R&D department. In Serbian, the word đavo means "devil".[1][2]

Unlike earlier strains such as the one which infected Bindi Bergara during Neo Umbrella's testing, the strain of C-Virus which saw widespread in the 2012 and 2013 terror attacks robbed the infected of their free will and made them intensely loyal to Carla Radames. Another modified strain may have been used for J'avo soldiers of Neo-Umbrella, who have been observed to mutate at will rather than as an automatic response to injury.

In appearance, J'avo maintain an identifiable human form, though significant differences can be seen on a closer inspection. Most noticeably, J'avo mutates to have multiple eyes, usually scattered asymmetrically across the face and forehead. There is no specific pattern to the eye positions, and eyes are of different sizes with as many as four small eyes positioned around large ones. The eye color themselves vary from an off-white or pale yellow to a darker yellow or brown. The emergence of new eyes causes damage to the face and may result in bleeding. Elsewhere on the face, the skin is noticeably discolored and veins become more prominent. J'avo teeth are seen to be uneven, jagged and discolored.

Mentally, J'avo kept their higher brain functions though maintain the aggressive tendencies of victims of other viruses such as t-Virus. J'avo groups are known to work together to kill uninfected people and can communicate verbally as well as they could before infection. Martial skills are also unaffected, meaning soldiers or militia fighters are just as skilled post-infection.

J'avo, even in their base form, are incredibly powerful. With one hand a J'avo is capable of lifting an adult human off the ground.

Their regenerative abilities are quite adept, as are their tolerance of pain, being able to receive injuries that would cripple or outright kill normal humans.

One J'avo was shown to survive having the entire upper half of its skull blown off. After kneeling on the ground for a moment, its head regenerated, standing and resuming its fight against BSAA agents.

As with other C-Virus infected, J'avo body temperature is higher than that of humans, the more it must heal itself in response to harm, the hotter its body shall become.

For this reason, when a J'avo finally succumbs to its wounds, its body shall disintegrate in a brief but dazzling flash of sparkling flames.

All J'avo demonstrate highly effective regenerative capabilities. They are able to completely heal heavily damaged limbs, muscle-tissue, and skin in mere moments. These regenerative capabilities, however, have the tendency of being extremely erratic and can cause spontaneous mutations depending on where the J'avo was damaged.[3] Interestingly, a J'avo is not limited to one mutation. It is possible for the same J'avo to experience multiple mutations such as a combination of a Noga-Let and the Ruka-Srp or the Noga-Oklop and the Ruka-Bedem. It is unknown what other combinations are possible. Special J'avo working directly with Neo-Umbrella displayed the ability to mutate at will due to the strain that's been used. The head Glava mutations seem to cause the J'avo to lose their intelligence, as their attacks become more animalistic.

For all intents and purposes, in the sense of mentality, J'avo have a human level of intelligence. They will use firearms (sub-machine guns, sniper rifles, rocket launchers), will signal to each other and make use of communication and tactics to take out their enemies. If a J'avo has no means of long-range attack, they may attempt to hold on to a target to give one of their allies a chance to attack. If they have the training, they can even commandeer tanks, trucks, attack helicopters, and jets, as any trained soldier in those branches could.[7] Many prefer to fight on foot, however; some J'avo will instead use close-range weapons, namely machetes and combat knives. They are extremely persistent and incredibly aggressive.

One of the most dangerous aspects of the J'avo comes from their spontaneous mutations upon injury. There is essentially no truly safe spot to injure a J'avo at some points as anything can trigger a certain mutation, which could lead to severely worsening a situation. Their mutations are extremely dangerous and deadly when combined with their intelligent coordination. The only thing that should be more worrisome than their mutations is their evolution into a Chrysalid. In this pod-like state, the J'avo is vulnerable but when it hatches they become substantially more deadly.

(Sometimes even using high-powered rounds can cause immediate cocooning. Although "Telo" mutations are much rarer outside of Edonia and Neo-Umbrella levels.) 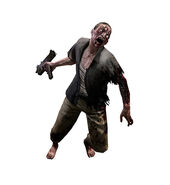 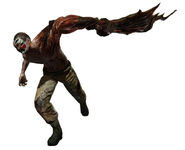 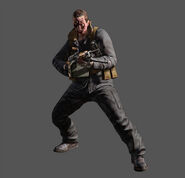 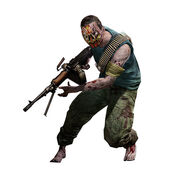 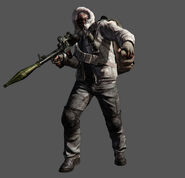 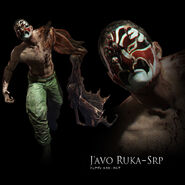 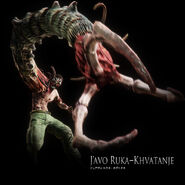 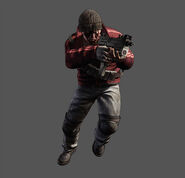 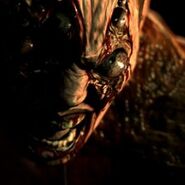 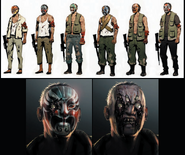 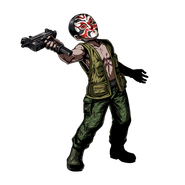 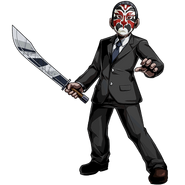