J. Martinez,[1] also known as "Ghost", was an operator in the Umbrella Security Service. He took part in Operation: NESTWRECKER,Special Forces Recording the mission to retrieve the Golgotha Virus from Dr. William Birkin at NEST. When Birkin resisted their orders to come with them and raised his handgun, Martinez instinctively shot him several times with his MP5, seriously injuring him. He was harshly berated by HUNK, who reminded him of their orders to bring Birkin in alive. The G-Virus samples were however unharmed and were successfully taken away. Martinez was soon after killed by Dr. Birkin as he was able to infect himself with a single remaining sample.[2]

The results screen when the Forgotten Soldier scenario is finished 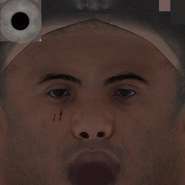 Retrieved from "https://residentevil.fandom.com/wiki/J._Martinez?oldid=770509"
Community content is available under CC-BY-SA unless otherwise noted.