"JD" was a member of the rebel forces fighting the government in the Eastern Slav Republic. He was a close personal friend of Buddy. His real name is not known, as he tells Leon that "JD" is not his real name.

JD grew up in the Eastern Slav Republic with his good friends Buddy and Irina. Little is known about JD up until the events of the civil war or during most of them, but he joined the resistance group around the same time as Buddy, following his friend into their fight for independence.

JD was present when Leon gained consciousness in one of the hideouts of the resistance movement, wearing Leon's confiscated equipment. He shushed Leon as Buddy held a knife against the American agent's throat while government soldiers searched the home above them. The two members of the revolution questioned Leon though while Buddy was cold and demanding, JD was more erratic and friendly with Leon. JD tried to engage Leon several times in conversation about American food and Hollywood movies, even telling Leon about his legal, completely unpirated, DVD collection. When Leon showed some degree of concern of the condition of their leader, Ataman Ivan Judanovich, JD seemed to share the sentiment and inquired to Buddy about it.

At that moment, government forces returned and attacked the basement hideout. The soldiers were distracted when Ataman showed signs of infection and Buddy attacked one, which spurred JD to grab Ataman and try to escape. However, JD was shot in the side by one of the soldiers while trying to run. Buddy saved the both of them and helped them through an escape tunnel. As Buddy helped Ataman along, JD felt that he had reached the end and collapsed from his gunshot wound. It wasn't until Buddy scolded him and reminded him about Leon's bulletproof vest that he stole that JD realised he was fine. As they went to check on Judanovich's condition, JD asked Buddy what he thought happened to Leon but Buddy brushed the comment off, merely saying he was probably dead.

JD and Buddy found that Judanovich's condition had worsened and could only watch as Ataman begged Buddy to take his life. Both saddened by the loss, JD was ordered by Buddy to make his way to the church while Buddy went to find their comrade, Marco. JD took one last look at Ataman's body before moving on.

JD was found hiding by Leon in a room off from the tunnel. He tried to keep Leon quiet, signaling to him that there was something behind him. An infected man, who was once JD's teacher by the name of Mr. Chenkov, attacked Leon but JD could only scream as he watched. When Leon tried to retaliate, JD told him not to kill him, though Leon did not listen. JD angrily pointed his gun at Leon as Leon tried to tell him that the man that was just killed was no longer the one JD knew. Two more infected attacked them, one grabbing JD from behind and throwing him across the room.

As JD got to his feet, Leon repeatedly yelled for him to shoot them. JD hesitated and by the time he finally raised his weapon, the infected attacked and tackled him to the ground. He could only lay there as the Plaga-infected man strangled him, the Plaga bursting through its mouth until Leon saved him. Leon scolded him for not using his weapon, and told him to shoot them in the head if he ever decided to use his weapon. JD stopped Leon from leaving and instead pointed him in the correct direction out of the underground area.

On their way out, they came across a steel door which Leon was forced to pry open with a crowbar he grabbed as a weapon. Three more infected came up behind the both of them as JD tried to squeeze through the door, but was unable to because of his size. A Plaga burst through the head of one of the infected, but JD was finally able to fit through the opening with the help of Leon, who promptly chained the door shut behind them. Seemingly pleased with their escape, JD found a ladder to the surface that he and Leon use.

When JD reached the surface with Leon, he saw many more of the Eastern Slav citizens infected with the Plaga. He watched with horror as a government soldier was held down by the civilians and a Plaga was expelled from one and forced down the soldier's throat. Leon asked JD about a place to hide, but JD was still distracted by the events he just saw, confused about what happened to the people of his country. When JD finally came to his senses, he led Leon along to the church he was to meet Buddy at.

Arriving at the church, JD immediately suspected Leon of being behind what happened to the Eastern Slav Republic. JD tried to find some hope as Leon told him that the townspeople that were infected would never be human again, but he was only told that the only hope was removing the spinal chord. He accused Leon of lying, but Leon rationalised asking why they killed Ataman if he did not believe that. Buddy entered with several other resistance members, confirming what Leon said and putting to rest JD's doubts.

JD questioned what they should do next and when Buddy said he would go and receive the master Plaga left for them by the Council of Elders, JD tried to talk him out of it. Buddy was only concerned with the future of the country, but JD only wanted his friend to live and not be infected like the rest of the town. When Buddy left, JD requested having word with Leon alone. He took Leon outside and freed him, telling him that Buddy intended to go and retrieve the Plaga.

When Leon criticised their methods of controlling B.O.W.s, JD tried to rationalise it saying how the entire rest of the world cares little for the Eastern Slav Republic and its people. As Leon prepared to leave, JD pleaded with Leon to save Buddy before he could use the Plaga, not wanting to his friend turned into a monster. JD told Leon about their childhood friend and Buddy's fiancé, Irina, and the event that caused Buddy to join the resistance.

He told Leon about how the government soldiers attacked the school Irina and Buddy worked at and killed Irina and several school children in the process. JD requested that in exchange for saying that Leon escaped, that Leon must find the Plaga and get to it before Buddy did. JD gave Leon his weapon back and told Leon where to find the Plaga. As Leon left, JD retrieved his knife as an infected citizen shambled toward the church.

When Leon returned to the church, he found the bodies of the resistance members and several civilians, including one laying on top of JD. JD was still alive, though, and pushed the body off of him. Leon asked if he was alright and JD remarked that he was fine, that he just let his guard down for a moment. Leon informed him that Buddy had already gotten the Plaga by the time he was there and that he discovered the government intended to incinerate the entire town.

As he started to leave, JD stopped and began to make pained noises causing Leon to question what was wrong with him. JD insisted he was fine and removed the vest he took from Leon, urging him to take it back. When Leon took the vest back, JD then urged Leon to engage him in a "fist-bump." When Leon finally gave in, Buddy entered the church and still seemed to be human, pleasing JD greatly.

JD began to cough profusely, causing Buddy to suspect Leon was responsible. However, JD insisted that Leon wasn't their enemy. He begged Buddy to go on without him as he didn't want to cause any more trouble for him. Showing signs of being fully infected, JD attacked Buddy in a rage but was put down with two shots in the back from Leon. With his last words, JD told Buddy that he never cared about the independence of their country and their people. He admitted to Buddy that all he wanted was to have fun with his friends. The Plaga completely overtook JD seconds after, the parasite bursting through his head. His life was finally ended by Leon, who told the infected JD that he was looking forward to showing him America.

Even though he suspected Leon of the events in the Eastern Slav Republic, JD acted very carefree around him and on multiple occasions tried to engage Leon about American products. He admitted that although they hate America, he loved things made in America such as Hollywood movies and fast food.[2] This influence seemed to heavily affect his demeanour seen in his bizarre appearance and his mannerisms, such as trying to engage Leon in a "fist bump." Several times, JD also used stereotypical phrases such as telling Leon, "You my man!"

JD grew up with Buddy and Irina and clearly had a close relationship with the former. It is found later that the only reason JD likely joined the resistance was to be with Buddy. He showed great concern about what would happen to Buddy if he became infected with the Plaga and even went so far as to free their prisoner, Leon, to go save his friend. 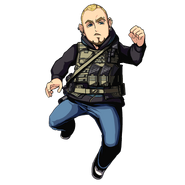 art from Minna to BIOHAZARD Clan Master.
Add a photo to this gallery

Retrieved from "https://residentevil.fandom.com/wiki/JD?oldid=811513"
Community content is available under CC-BY-SA unless otherwise noted.