Start a Wiki
watch 02:38
The Loop (Games)
Do you like this video?
Anderson universe
(Covers information from Anderson's universe)

During Alice's escape from the interrogation room in Umbrella Prime, she entered the Tokyo simulation created to monitor the spread the t-Virus among the human populace. Once the simulation began, J Pop Girl stepped into the street with the crowd, already showing signs of infection. She bumped into Alice before stopping in the middle of the intersection. Attacking a businessman, in repeat of the actual J Pop Girl's last acts, several other Undead emerged and attacked the surrounding populace, causing a panic.

When Alice fled into a narrow white corridor, J Pop Girl and several other Undead followed her. Alice quickly flung J Pop Girl into a wall and shot her twice in the chest, briefly stunning her. After Alice killed the other Undead, J Pop Girl rose again and started for Alice, sporting the tentacles of a Majini Undead. Alice shot J Pop Girl through the head before she could reach Alice, killing her.

Alice standing next to J Pop Girl in Retribution. 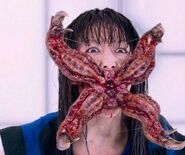 Retrieved from "https://residentevil.fandom.com/wiki/J_Pop_Girl_(clone)?oldid=763210"
Community content is available under CC-BY-SA unless otherwise noted.