Experimental
Jabberwock S3 was an experimental biological weapon series produced by an unnamed rival of Umbrella that was also developing B.O.W.s. Drug lord Javier Hidalgo purchased some stock of this sometime before the US Government's investigation into him in 2002.[1]

The B.O.W. borrows some attributes from one of Umbrella's failed prototypes, the Bandersnatch, though the properties of the t-Veronica virus have enhanced it, showing numerous similarities to the mutations that Steve Burnside underwent.

It has eight sickle-shaped arms (three of which are of reduced size) that possess unparalleled strength, and in its defensive form, it uses these arms to cover its body defending its exposed heart, making bullets mostly useless against it. It has a higher-level intelligence and thus can understand commands, and can carry out its duties under a variety of circumstances. 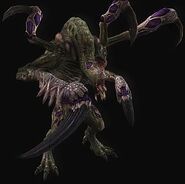 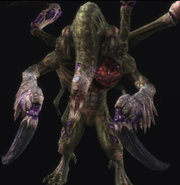 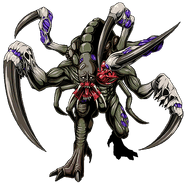