Dr. James Marcus (ジェーマス・マーカス, Jēmasu Mākasu?) was a virologist who pioneered 20th century viral weapons research. He was one of the founders of Umbrella Pharmaceuticals, which developed the t-Virus. A brilliant and enthusiastic scientist, he held a dark reputation for unethical experiments and mysteriously disappeared in 1988.[2][notes 1]

Marcus was born around 1918. He attended university alongside Oswell E. Spencer, heir to the noble Spencer family, where they advanced in the biological sciences. In the summertime he lived at the Spencer family's estate along with Edward Ashford, a close aristocratic friend of Spencer.[3]

In the 1960s Oswell, now as Earl Spencer, became obsessed with an entry in the Nineteenth Century work, Natural History Conspectus, by Henry Travis.[4] Travis' work was not taken as a serious work and was widely regarded as fallacious; Marcus however considered the report on the "Stairway of the Sun" flower to be indicative of a mutagenic virus. In 1966 he agreed to head out to West Africa in search of the flower with his prized student, Brandon Bailey, and Spencer himself. After three months of testing flowers for signs of the virus, they made a breakthrough and named the sample "Progenitor".[5] It was their idea to use the virus to reshape humanity in a new form, having been exposed to eugenic ideals.

Their initial attempt to utilise the virus failed when attempts to cultivate the flower in laboratory conditions failed. For what Marcus supposed was due to a specific environmental factor, the flowers were not producing the Progenitor Virus lying within their genome. Despite this lack of any breakthrough, Spencer insisted they form a company with Edward, now an Earl, to mask their eugenics project in March 1967.[5][6] In April 1968 Marcus and Bailey decided to return to West Africa to retrieve viral samples directly from the flowers there. However, taking advice from Spencer, they hired a team of mercenaries to force the Ndipaya off their land to allow the safe recovery of the flowers later. They received reports that half of the territory was captured in August, and Bailey was sent over to oversee the construction of a laboratory to directly retrieve Progenitor samples.[7]

By mid-1968 Dr. Marcus had confined himself at his new laboratory in the Arklay. The Umbrella Research Center was to cater to Progenitor Virus research alongside Spencer's Arklay Laboratory and Ashford's own lab. Though the eugenics ideal was still at the core of the new company, Umbrella Pharmaceuticals, the trio became interested in the creation of biological weapons with a modified strain of the virus, which could then be sold to the US military. This project would raise funds for Spencer's own "Wesker Plan", the raising and eventual genetic modification of a group of individuals to usher in the new world.

Marcus spent the next ten years exploring this bioweapons research at his lab while also officially leading the efforts to train a new generation of researchers as executive trainees. Marcus largely ignored the students, giving his assistant manager oversight over the training. In September 1978, Dr. Marcus created the t-Virus, which is a mutagenic virus that can create bioweapons.[8] In the same year, however Marcus took in Drs. Albert Wesker and William Birkin, who assisted him with the development of bioweapons and viral research. The t-Virus was completed in that year.[9][10]

Over the 1970s and 1980s, a gulf developed between Marcus and Spencer. Spencer's teams made repeated efforts to steal Marcus' research for their own projects in 1978. At this point Marcus had begun to develop biological weapons, creating the Plague Crawler; Lurker and Eliminator with the aid of "t-Virus", a modified Progenitor strain which mutated in the body of a leech. Wanting more data, as well as intending to silence anyone who tried to steal his data, Marcus began using his own trainee staff as guinea pigs, soon finding the mutant strain was now capable of keeping the host alive in a highly aggressive, mentally deficient state rather than killing them. In large part because of his success with the t-Virus's creation, his entries by 1978 started to heavily imply that he was deeply considering taking over Spencer's position as CEO of Umbrella.[6] This act got Spencer's attention after the Arklay lab was provided with several trainees for further research. In July 1978 the training school was closed, and the research staff transferred to the Arklay lab to ensure Spencer's own research would yield the superior military weapon.

The rift between Spencer and Marcus finally became so great in 1988 that a special forces team was sent out into Marcus' lab to assassinate him. As he was experimenting with his Queen Leech, two Umbrella Security Service commandos stormed into the laboratory and gunned him down. Drs. Wesker and Birkin taunted Marcus while he bled to death, with Birkin gloating his Arklay team's retrieval of the research data. Marcus' body was disposed of, thrown in the waters of a nearby sewage plant.

The Queen Leech, thrown out with him, entered his body and slowly spent ten years merging their bodies together. This resulted in a new hybrid creature with Marcus' memories, exacting vengeance in mid-1998 in his name.

A painting of Marcus in the Research Center.

Marcus' leeches were able to combine their bodies and alter their pigments to copy Marcus.

Marcus' Face, as replicated by the Queen Leech. 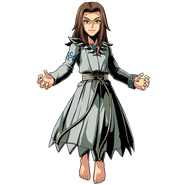 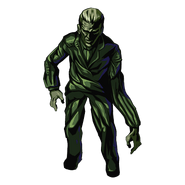 Retrieved from "https://residentevil.fandom.com/wiki/James_Marcus?oldid=789865"
Community content is available under CC-BY-SA unless otherwise noted.