Javier Hidalgo was the leader of the drug cartel, the Sacred Snakes, a specialist operation mastered by the US government to disrupt illegal trafficking in Latin America.

Hidalgo took de facto control over a large area of the jungle and wanted to expand his territory.[1] He ruled the entire area absolutely. The small government was unable to do anything about Javier's control of the drug trade. After the United States and other nations learnt of the fact that Javier possessed bioweapons, Jack Krauser and Leon S. Kennedy had been called in to infiltrate this small South American country and find him.[1]

The drugs that Javier's organization was producing had been contaminating surrounding countries, as well as having found their way into America. Javier was amassing a fortune in drug money, building up his own private army, and fortifying his operations. He was a wanted criminal in many countries, and was an uncommonly cruel man.

This ability to slip through the fingers of justice and gather other criminals is not something an ordinary person could accomplish. Javier had achieved his goals through the use of violence and strict control of the region. He rewarded those who submitted to him, and brutally punished anyone who stood in his way, making harsh examples of anyone who opposed him. He ruled his dominion through fear.

He had a daughter, Manuela Hidalgo, in 1986 with his wife Hilda. When Hilda became infected with an incurable and rare disease, Javier tried to save her in 1991 with the t-Virus; it worked, but she mutated. When Manuela presented the same symptoms ten years later, Javier used the t-Veronica virus on her and prevented her transformation by kidnapping young girls from the Mixcóatl village and harvesting and transplanting their organs.

After Hilda mutated, Javier never trusted Umbrella again, but maintained contact with black market bioweapon dealers like Albert Wesker and made the Sacred Snakes study the virus and experiment it on living creatures. B.O.W.s made with the t-Virus (mainly zombies) were used in combat against the Sacred Snakes' enemies, such as communist guerillas.[1]

The mutated Hilda was kept by Javier in a special room[2] and was released during the 2002 incident.

After the mutated Hilda was defeated, Javier fused with the plant in his botanical garden, becoming the V-Complex in order to take his daughter back from Leon and Krauser. His new formed body then detached from the ground and made its way through the mansion absorbing anything in its path (much like William Birkin's fifth form). However, he started to lose his consciousness during the fight due to not having a preparation like Alexia did. This dangerous monster could contaminate 60% of the Amazon with the t-Veronica in 48 hours.[3] In the first part of its boss fight, the V-Complex's arm smashed into the area where Hilda was killed and attacked Leon, Krauser, and Manuela but to no avail. Part of his arm was lost and he was forced to extract into the outside of the mansion. In the final fight with Javier, Leon had to destroy his legs in order to cripple him. Soon after the V-Complex regenerated and his deformed body was shown through the head of his new form. Manuela assisted Leon and Krauser with her flammable blood, but she was losing too much of it, threatening her life. Finally Javier was killed by a bullet to the head from Leon after he asked "Kill me!" so his beloved daughter would not be hurt anymore.[4] In the bonus Krauser levels' ending, Wesker was seen staring down at the burning remains of Javier through binoculars.

Javier prepares to merge with the Veronica plant to become the V-Complex. 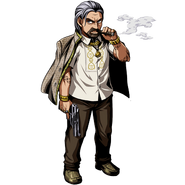