Jeff was a member of the BSAA North American Alpha Team who took part in the Lanshiang operation in 2013, serving under Captain Chris Redfield. After a team member named Keaton was grabbed by the Iluzija, the team went after the creature to rescue their team member. When the team slid down an elevator shaft, the Iluzija grabbed Jeff and dragged him away. His body was later discovered by Chris Redfield, Piers Nivans and Marco Rose. He was the IIuzija's last victim.

Marco, Jeff and Reid in Poisawan 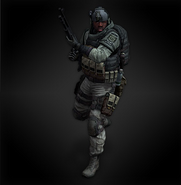 Add a photo to this gallery
Retrieved from "https://residentevil.fandom.com/wiki/Jeff_(BSAA)?oldid=811522"
Community content is available under CC-BY-SA unless otherwise noted.