Jerry was an employee of the Mizoil Gas Station located in the outskirts of Raccoon City.[1]

On September 29, 1998, Jerry was attacked at his place of work, the Mizoil Gas Station. Sheriff Daniel Cortini arrived at the scene moments later, who then struggled with the criminal at the back of the gas station.

When either Leon Scott Kennedy or Claire Redfield arrived at the station on their way to Raccoon City, they entered the place after hearing a noise. Jerry was seen on the ground with his neck bit, pointing towards the back of the station. However, Leon or Claire witnessed Daniel Cortini being killed by the criminal who turned out to be a Zombie all along. On their way out of the station, Jerry could be seen getting back up, though he had unfortunately turned into a zombie himself. 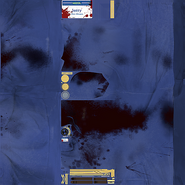 Jerry's textures in the game, showing his nameplate with his name