Jessica is playable in Raid Mode. Her melee attack involves her raising her right leg straight up while charging then dropping it straight down for the attack. In all her costumes Jessica uses the basic knife swing attack. Her Snowy Mountain and Vintage costumes use the Survival Knife while her Diver costume uses the Diver Knife.

Jessica is playable in Resident Evil: Revelations 2's Raid Mode as a costume for Gina Foley. 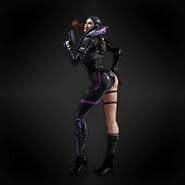 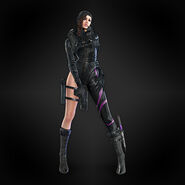 Jessica 2 Diorama Figure
Add a photo to this gallery
Retrieved from "https://residentevil.fandom.com/wiki/Jessica_Sherawat/gameplay?oldid=806880"
Community content is available under CC-BY-SA unless otherwise noted.