Jill is one of the protagonists in Resident Evil. She is considered the ideal character to be chosen by novice players, as Jill has a larger inventory space (eight slots compared to Chris who has only six) and has access to the lockpick, which allows her to open locked desks and most of the Mansion doors without having to collect simple keys. She also gets to use a grenade launcher, a weapon exclusive to her scenario and capable of firing several types of rounds. However, she is more susceptible to damage from enemies due to her low health.

Jill's alternate costume varies according to the play version. In all versions (except in Director's Cut), to unlock the costume, the player must complete Jill's story mode with the best ending:

Jill is also playable in the Sega Saturn port's Battle Game. She has a own unique item rosters when accessing the Item Box where she are able to choose equipment for the following battles:

Jill is playable in every Resident Evil: Deadly Silence's modes. Her assignments are the same as the original game, however, she is particularly more faster (especially in Master of Knifing mode) and in addition to the lockpick, Jill also comes with a grenade launcher.

Jill also has a new alternate costume unlike the original game that there was only one:

Jill returns as the protagonist in Resident Evil 3: Nemesis. Her initial inventory depends on the difficulty played: in the Easy Mode, she starts with a First Aid Kit Box, an M4A1 Assault Rifle, two clips of Assault Rifle Ammo while in the Hard Mode, she starts with a Hand Gun and the Reloading Tool. In both difficulties, she initially has eight inventory slots and her exclusive weapons are Western Custom M37, Grenade Launcher and Mine Thrower while the lockpick returns as Jill's exclusive item for opening the simple locks.

Jill returns as one of the protagonists in the remake of the Resident Evil game. Her assignments are the same as the original game, however, besides the lockpick (which will now unlock only a different set of Mansion doors), Jill also has access to another exclusive item, the defensive weapon Stun Gun.

Jill also has two new alternate costumes different from the original game and in the HD Remaster version, she gained one more:

Jill is the playable character in three scenarios: "Mansion Incident", "Raccoon's Destruction" and "Umbrella's End". Her initial weapon is the Samurai Edge 2 in the all scenarios and her melee attack involves Jill jamming a Stun Gun into the zombie's body and kicks it away.

Jill, in a brainwashed state, is encountered in Resident Evil 5's Campaign mode as the boss at end Chapter 5–3 in the Monarch Room after to beat Wesker by the first time.

Jill is one of the two playable characters in the extra scenario "Lost in Nightmares". Jill's knife attack is faster than Chris', by comparison; however, her melee attacks deal less damage than Chris'.

Jill returns as a playable character in the extra scenario "Desperate Escape". She maintains the same assignments seen in Lost in Nightmares.

Jill is a unlockable character in Resident Evil 5's mini game The Mercenaries. She has a different knife attack, being extremely fast. Jill also has two outfits, the BSAA costume and Battlesuit, each with a unique set of weapons. While Jill is not playable in the Reunion version of the game mode, she acts as the helicopter pilot who briefs the player(s) as to their objective at the beginning of the round, warns them when time is running low, and congratulates them upon a successful match. Already in the United version, however, Jil is once again a playable character.

Jill also is a unlockable character in Versus mini game. She has same two outfits seen in The Mercenaries, each also with a unique set of weapons depending on gametypes, though they share the same moveset. Her finishing Melee Move is the Cartwheel Kick.

In the non-canon game Resident Evil: The Mercenaries 3D, Jill is one of the three starting characters, along with Chris Redfield and HUNK. She is one of the fastest characters in this game.

Jill is the protagonist of Revelations. As in other game's segment, she stands out for her speed and agility to dodge, however, Jill remains more susceptible to damage than when compared to Chris. She starts her inventory with a Large Knife and Handgun M92F. Her exclusive weapons are her custom Samurai Edge, Shotgun Windham, Machine Gun MP5, Machine Gun AUG and Magnum L. Hawk, all upgradable. Jill's melee attack is a reverse roundhouse kick and her knife's moveset stabs quickly at the enemy, being the only character whose knife attack is not uses the swinging motion.

In Raid Mode, Jill uses the smaller knife and uses a unique quick stabbing attack. She only has two costumes in the original 3DS but has three in the ports.

Jill is an unlockable character in Raid Mode of Resident Evil: Revelations 2. She wears her wetsuit from the original Revelations and her specialty is evasion.

Jill returns as the protagonist in the remake of the Resident Evil 3: Nemesis game. Her assignments are almost the same as the original game, however, she is more faster and evasive than Carlos Oliveira. In compensation, she is less resistant to damage than him. She starts her inventory with a G19 handgun and Survival Knife while her scenario's exclusive weapon is the MGL Grenade Launcher. Unlike the original game, to current date, Jill has only two unlockable alternate outfits:

We Ran Out of Costume Names

Jill has a few different diorama figures modeled after her available on Resident Evil.net. All of her figures can be obtained through using your daily Genesis Scratchcard. You can earn up to 30 of each figure. Jill also appears in some of the Genesis scratch card pictures.

This figure takes up 1 space on the diorama stage.

This figure takes up 2 spaces on the diorama stage. This figure was also given as a free gift for signing up for the Revelations version of Resident Evil.net. 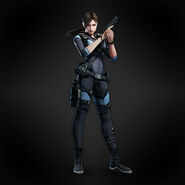 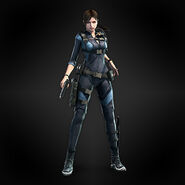 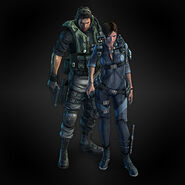