watch 03:03
The Loop (Games)
Do you like this video?
Anderson universe
(Covers information from Anderson's universe)

Jill had raised herself in the S.T.A.R.S. special police force as their rising star. Her reputation was ruined after a botched investigation known as "The Arklay Mountains Incident". She gained insight into a "classified bioweapon weakness", which was said to be a "cranial flaw". Initially, Umbrella intended to bribe her to keep the international bioweapons market a secret. Had that failed, they planned to have her "neutralized".[3][4] She attempted to go to her superiors with the information and was suspended from duty on the grounds that she was suffering from a breakdown following a colleague's death.

The Raccoon City Incident began during her suspension, and she quickly armed herself and reported for duty at the Raccoon City Police Station, quickly finding the ill-prepared in dealing with the Undead. Saving a criminal named L.J. from an Undead prostitute, Jill warned everyone inside to leave the city immediately. By the time she got to Raven Gate Bridge Umbrella had set up a checkpoint and evacuation was slowed to prevent the T-virus escaping. When an Undead civilian attacked S.T.A.R.S. Sergeant Peyton Wells, the checkpoint was closed and everyone left inside forced back into the city.

Jill, Peyton and journalist Terri Morales hid at the nearby Raven's Gate Church, meeting Angus Mackenzie inside. Jill explored more of the church, finding the church's priest feeding body parts to his Undead sister. A fight took place as Jill tried to kill the woman against the priest's wishes, but the woman broke out of her restraints and killed her brother while their attention was elsewhere. Jill shot the woman immediately after, alerting a group of Lickers to their presence, and resulting in Angus' death. The three were then saved by rogue Umbrella agent Alice.

Jill, Alice, Peyton and Terri make their way through city cemetery. As they go on a bit further Peyton stops and begins to feel pain. Alice pulls her gun on him, resulting in immediate retaliation from Jill. Though Alice explains what will happen, Jill assures her that if Peyton turns, she'll "take care of it". Soon thereafter, the Undead begin to rise from the graves and attack the group. Alice and Jill try to stop them but the group is forced to retreat.

As the group roam the streets they get a call from a Dr. Charles Ashford; he tells them that he can get them out of Raccoon City before Umbrella nukes the city, if and only if they rescue his daughter, Angela Ashford.

On the way to Raccoon City Junior School where Angela, is hiding, the group is confronted by the Nemesis and Peyton is killed. Jill fires on Nemesis to no avail, Alice tells Jill and Terri to run while she distracts the monster. Jill and Terry try to hot wire a truck when a revived Peyton attacks them. Jill kills him, shooting him point-blank in the head. As the two head for the school, they encounter L.J., the man she rescued back at the police department.

Once they reach Raccoon City Junior School, Jill tells L.J. and Terri that they'll all need to split up to find Angela. When Jill finally finds Angela, she discovers Terri has been killed. Jill and Angela make their way to the school's cafeteria, which is occupied by the Undead and a pack of dogs. Jill tries her best to take care of them but the dogs are too much for her to handle. Nicholai Ginovaef comes to her aid and holds off the remaining dogs while they escape. Jill and Angela make their way to the kitchen, once again they are confronted by the pack of dogs. They creep through the kitchen quick enough to reach the exit and are rescued by Alice. They regroup with L.J. and Carlos Olivera, who informs them he and Nicholai --- who is found dead in the cafeteria --- were also sent by Ashford to rescue his daughter.

The group uses a pay phone outside of the school to contact Dr. Ashford, he informs them that the only way out of the city is on Umbrella helicopter at Raccoon City Hall. The group travels to city hall and take out the Umbrella soldiers guarding the area. As the group boards the helicopter they are taken hostage by Timothy Cain. After a brief battle between Alice and Nemesis, Jill and the others are freed from their restraints. Jill secures Angela and joins in the fight against Umbrella soldiers. When the threat is neutralized, they board a helicopter and leave Raccoon City just as the nuclear warhead lands on the city. The helicopter is thrown into a tail spin and crashes just outside the city, somewhere in the Arklay Mountains. During the crash, Alice was hit by a piece of internal structure from the plane and was injured to the point of no hope, but the others escaped before Umbrella arrived.

At an unknown point in time, Jill and the others sent Terri's recording of the outbreak to the news; their efforts, however, are thwarted by Umbrella, who circulate the false story of a nuclear reactor meltdown as the cause of the city's destruction. Their proof discredited as a hoax, Jill and Carlos are wanted by the authorities.

Three weeks after the Raccoon City incident, Jill, Carlos, L.J., and Angela, learn of Alice's survival and infiltrate a laboratory as Alice regains her memories and escapes. Unaware of Dr. J. Isaacs' aid and the "Project Alice" program, they secure Alice from Umbrella and depart from facility grounds. Jill inquires what happened to Alice while she was there, but she gets no response.

Now controlled by Umbrella, Jill and dozen Umbrella soldiers have been sent to eliminate all remaining survivors, including primary targets, Claire Redfield, Chris Redfield and "Project Alice". She informs her soldiers to take no prisoners and shoot to kill, and that they'll be in for the fight of their lives. She and her unit attacks the Arcadia and successfully captures the survivors aboard the ship.

Under the command of the Red Queen, Jill hunts Alice and Ada Wong down with orders to capture them. She captures Ada and is later confronted by Alice above the Umbrella facility she was held captive in. The two then engage in hand-to-hand combat as Leon Kennedy and Luther West fight the clone of Rain Ocampo. Just as Jill was preparing to kill Alice, Alice ripped the scarab device controlling her off her chest and shot the device, returning Jill to normal.

Alice joins in the fight against Rain, who had just killed Luther and injured Leon. After a serious beating, Alice notices the Undead below the frozen sea. Jill throws Alice her gun, allowing her to shoot the ice where Rain was standing, causing her to fall through and be eaten by the Undead. Jill, along with Ada, Leon, Alice and Becky, are present when Albert Wesker returns Alice's powers to her and later explains his plot for his final stand against the Red Queen and the Undead.

In The Final Chapter, Wesker's defection from Umbrella is revealed to be a ploy to gather the surviving remnants of humanity in one location. Wesker ultimately betrays those he gathered, destroying the White House and killing all but Alice, including Jill. 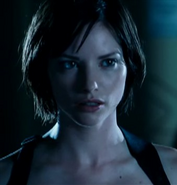 Jill in the Raccoon Police Department. 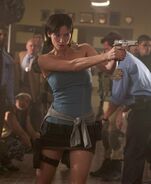 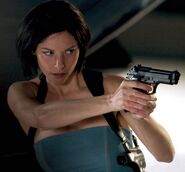 Jill as seen in Apocalypse.

Apocalypse.
Add a photo to this gallery 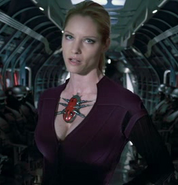 Jill, seen at the end of Afterlife.
Add a photo to this gallery

Jill jumping the Umbrella Helicopter and shooting at Alice.

Jill fires at Barry and Leon.

Jill in the Allyway and sees a Tsunami coming and runs to Submarine with Ada Wong & Rain Ocampo.

Jill, about to face Alice.

Jill, after being freed from the Scarab control by Alice.

The Jill Valentine we know.

Retrieved from "https://residentevil.fandom.com/wiki/Jill_Valentine_(Anderson)?oldid=857396"
Community content is available under CC-BY-SA unless otherwise noted.