Jill Valentine (Regina Ver.) & Brain Sucker is a toy set by Moby Dick, part of its BIOHAZARD Real Shock Action Figure line. It came with a collectible part for building the Nemesis (Type-3) model. A US variant of the packaging also exists which suggests this set among a few others saw a limited North American release.

This Jill figure stands about 8 inches and comes with a Grenade Launcher, a Mine Thrower, a Minigun, alternate hands to hold said Minigun and a stand with the Biohazard logo (regardless of region) as well as the text "Physical Containment Level P4" "Biological Containment Level B2" featured below. It features mostly simple articulation which includes rotation at the wrists, just above the elbows, ankles, and unusually for Moby Dick human figures, at the thighs.  The head can also be swiveled to various angles and is the only complex piece of articulation on this figure.

The Brain Sucker figure stands about 8-9 inches tall and features various points of articulation. The thighs and shoulders move on joints that can be bent and rotated.  The wrists on all three arms, the ankles on both legs, and the tail can all be rotated. The feeding parts on both heads can be rotated and pivoted slightly. The right head can be bent up and down as well for more posability. 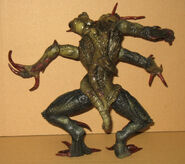 Close Up of Face

An attempt at immitating it crawling on all five of its legs.
Add a photo to this gallery

Retrieved from "https://residentevil.fandom.com/wiki/Jill_Valentine_(Regina_Ver.)_%26_Brain_Sucker?oldid=789280"
Community content is available under CC-BY-SA unless otherwise noted.