View source
watch 01:13
Who is Joe Baker?
Do you like this video?
Play Sound
Prime universe
(Capcom's primary storyline)

Joe Baker is a Louisiana civilian who lived in the swamps of Dulvey, Louisiana. He is the older brother of Jack Baker, who ran the family ranch until his death in 2017. He was the only member of the Baker family to not be influenced by Eveline due to his solitary lifestyle, and was unaware of what happened to the rest of his family until it was too late. After he realized the dire situation, he was determined to save his only remaining family – his niece, Zoe Baker, from her impending death.

Joe was as physically fit as his brother Jack was, if not more so. Joe once broke Jack's nose during a fight in their childhood days, and also clothes-lined him into the swamp on one occasion.

Joe also served in the U.S. military like his brother Jack, wearing his pair of dog tags around his neck and possessing extreme hand-to-hand combat skill. Despite sharing similarly strong familial values with the rest of the Bakers, he did not keep in contact with them and lived as a hermit in the swamps nearby their home.

In 2017, following the deaths of Marguerite, Lucas and Eveline, and the rescuing of Ethan and Mia Winters, the Mold continued to spread throughout the swamp, prompting Blue Umbrella to quarantine the area and set up walls to contain it. Unaware of what had occurred the last few years, Joe adapted to fighting the Molded instead of migrating or calling for help.

Weeks later, Joe stumbled upon a pair of BSAA operators who had found his niece Zoe unconscious and in poor condition after being calcified by Eveline. After attacking the soldiers and taking one of them alongside Zoe back to his shack, he interrogated the soldier under the assumption that they were responsible for the Mold monsters and Zoe's condition. The imprisoned soldier explained to him that they had a cure prepared for her, which was located in a nearby shack. Vowing to save Zoe by any cost, he quickly left and retrieved the cure whilst fighting various Molded along the way, but upon returning to his shack he found it set ablaze. Rushing back in to save Zoe, he administered the cure to her but was angered when it seemed to have no effect. The captive soldier explained that the cure was ineffective as it was only a partial dose, and volunteered to lead him back to his base for a full dose if he was set free, but he was soon grabbed through the wall and ripped in half by an entity revealed to be the Swamp Man. Joe was forced to flee with Zoe on his boat to look for the base.

Further along the bayou, Joe came across an industrial makeshift quarantine wall set up on behalf of Blue Umbrella and discovered that the base the soldier had talked about had been overrun by Molded. He set aside Zoe to rest in the nearby boathouse and made his way into the camp, where he discovered that the cure had been stored in a nearby paddle boat. However, on his trek through the swamp and the boat, Joe once again encountered the Swamp Man as well as more Molded and some Mold-infected alligators. Joe was able to reach and operate the synthesizer for the cure, but was forced into another duel with the Swamp Man once he got his hands on the full dose he needed. Joe successfully beat the Swamp Man by decapitating him with his bare hands and hurried back to Zoe to try and give her the cure, but the Swamp Man simply re-emerged from the depths of the bayou and kidnapped Zoe, taking her through the now opened quarantine wall and forcing Joe to follow via boat.

After brawling and scrapping his way through more Molded creatures in the swamp, Joe finally tracked Zoe to the old Dulvey Parish church, but ended up being ambushed by the Swamp Man. In his attempts to fight back, Joe tried to once again pull off the Swamp Man's head, but instead unmasked him and revealed the identity of the creature to be none other than his own brother Jack. Joe was so taken aback by the reveal that he let his guard down long enough for Jack to knock him out clean with one punch. Upon regaining consciousness, Joe soon found himself trapped in a coffin, and despite his pleas Jack pushed him into the waters of the swamp, leaving him to drown.

However, Joe's coffin ended up washing up near the Baker ranch, and once he awoke he overheard chatter on a nearby radio from BSAA forces who were under attack from Jack at the main estate and were requesting reinforcements. Joe made his way towards the property, salvaging an AMG-78 power gauntlet from their belongings along the way in order to break into the grounds of the makeshift camp that had been set up in the courtyard of the estate. Upon entering the main lobby of the main house, Joe found Zoe sat at a dinner table, but was soon jumped by Jack once again which forced him into one final confrontation with his brother. Joe successfully used the power of the gauntlet to put an end to Jack's life once and for all, and finally got the chance to administer the full dose of the cure to Zoe just as Chris Redfield and his team arrived at the scene.

After everyone had been moved out to a lab tent, Blue Umbrella ensured that Zoe was fully cured. As Zoe expressed her relief to Joe that her nightmare was finally over, he comforted her by assuring that her family, especially her father Jack, had to have still loved her deep down despite their infection, even in their final days.

Joe is the player character of the "End of Zoe" scenario in Resident Evil 7: Biohazard. He has 20 inventory slots and starts off with Bare Fists and Joe's Survival Manual. Thus, Joe uniquely can use left and right punches and combos when no weapons (or the Bare Fists themselves) are equipped. He also has access to the finisher, stomp, and stealth kill melee prompts, and can still perform actions while moving through water. 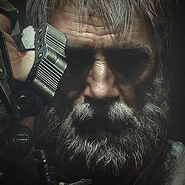 Joe with Zoe Baker and Chris Redfield at the ending