Climate-specialized B.O.W.
The Jumping Maneater was a South American spider-based B.O.W. model optimized for hot and humid climates, in active production sometime before 2002.[1][2] They were encountered by Leon S. Kennedy and Jack Krauser during Operation Javier.

Unlike their Web Spinner counterparts in production in 1998, the Jumping Maneater was able to disperse web from its spinnerets at prey. With prey entangled in the webbing, this ability was to give the B.O.W. the chance to deal the final blow. The Jumping Maneater was based on a South American jumping spider to allow its specialization in jungle-based warfare. 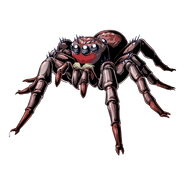