watch 02:39
The Loop (Games)
Do you like this video?
Anderson universe
(Covers information from Anderson's universe)

K-Mart is a young girl that was rescued by Claire Redfield's convoy sometime during the Global T-Virus pandemic.

In Resident Evil: Extinction, K-Mart explains that she was named "K-mart" because she was found there.

During the events of the film, K-Mart is shown riding in Claire's Humvee; besides Claire, K-Mart is also close with Carlos and Mikey. She befriends and looks up to Alice as well and gave her a bracelet for luck. When Alice inquires about her real name, K-Mart explains that she "never liked" of her old name and given the circumstances, it was "time for a change".

K-Mart often avoided danger by staying out of sight, however, she does not shy from a fight (particularly when cornered); during the fight in Las Vegas, she manages to kill a Super Undead, shooting it in the head with a Shotgun. She is nearly killed by a zombified L.J., who had succumbed to his infection after a long enduring battle, while hiding with her in a vehicle; however, she is saved by Carlos, who was bitten and infected by L.J. in the process. In the end, she is one of the few who survive long enough to depart in a helicopter piloted by Claire on the way to Alaska and is upset that Alice is not coming.

In Resident Evil: Afterlife, it is revealed that the message from Arcadia is actually an Umbrella trap; K-Mart and the other survivors are ambushed in Alaska by Umbrella forces, who then attached a device to their chests. Claire manages to escape, but K-Mart and the other survivors are brought to the Arcadia, a massive Umbrella tanker that was broadcasting the message in order to lure survivors in for experimentation.

When the ship reaches Los Angeles, Alice, Claire and Chris Redfield board the ship and find the room where everyone's being held in stasis. K-Mart is the first to be released and is momentarily confused from her imprisonment. She later joins the fight against Wesker in time to knock Bennett out and toss Alice her shotgun, allowing Alice to temporarily defeat Wesker.

K-Mart stands out on deck with the other survivors at the end of the film, listening to Alice's message of hope being broadcast, and watched as the fleet of Umbrella gunships approached their position.

K-Mart did not appear in Resident Evil: Retribution. When asked, Spencer Locke[2] stated that she would not be reprising her role. During the attack on the Arcadia, K-Mart, Chris and Claire were captured by Umbrella.[3]

K-Mart did not appear in The Final Chapter and Claire does not reveal what happened to her or Chris.

K-Mart wears an orange undershirt and wears a brown belly shirt over it. She wears a brown vest that contains some rifle bullets. She has a green cap on her head and also wears black glasses sometimes. Her brown skirt is almost knee length and is help up with her black utility belt. Her legs are covered white leggings, which are covered up by black leg warmers, which is covered by red and white socks. She also wears beige ankle-length boots.

Her blonde hair is styled in multiple hair styles, and she wears them with bangs.

Her blonde hair has grown and is cleaner and flows down her back.

K-Mart, as seen in Afterlife.

K-Mart before the Super Undead fight 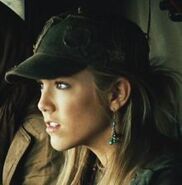 K-mart, Alice, Chris & Claire watches as a squadron of Umbrella helicopters approaches.
Add a photo to this gallery

Retrieved from "https://residentevil.fandom.com/wiki/K-Mart?oldid=855913"
Community content is available under CC-BY-SA unless otherwise noted.