Heisenberg was one of the children being kidnapped and subjected to Cadou parasite experiment and brainwashed to be servants for Miranda. Eventually, he, Alcina, Donna and Moreau became Miranda's lieutenants.

Among the lords of the Four Houses, Heisenberg is the only one who holds a grudge against Miranda, due to her own selfish desire to revive her late daughter and how he sees Miranda's family as "experiments". Heisenberg secretly planning a rebellion and at one point even persuades Ethan to join him, but the latter refuses.

The Heisenberg family was closely associated with the noble Beneviento, Moreau, and Dimitrescu families, and maintained an alliance with them in controlling the region even though he and Alcina Dimitrescu don't seem too fond of each other as Alcina saw him as a man child and his loyalty toward Miranda was questionable. This control allowed Heisenberg's family to run their factory with barbarous cruelty. According to sources he also rarely strayed from the factory, and mostly held himself up in its walls.

Aside from his regenerative abilities and mutation thanks to the Cadou, Heisenberg's mutation provided him with electric organs similar to the torpedo rays, allowing him to control magnetic fields to move metallic objects. Heisenberg would later transform by stretching his body apart and spreading his biomass through a large mechanical apparatus he assembled in and around his flesh, becoming a cybernetic mutant. He is considered to be the strongest of the 4 lords and the one with the most stable mutation. 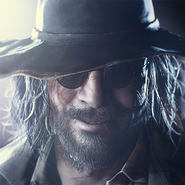 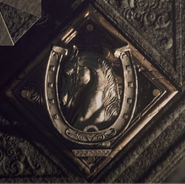 Retrieved from "https://residentevil.fandom.com/wiki/Karl_Heisenberg?oldid=887256"
Community content is available under CC-BY-SA unless otherwise noted.