Kathy Burton is the wife of the BSAA advisor Barry Burton. She is also the mother of his two daughters, Moira and Polly.

Little is known about Kathy's past except that she met and married Barry Burton when he was a member of the U.S. Air Force or after. Later, in the mid-1990s, Kathy gave birth to two girls, Moira and Polly, and in 1996, she and her family moved to Raccoon City due to Barry joining Special Tactics and Rescue Service unit. Because of this work, she and her family would come in contact with the other S.T.A.R.S. members, in particular with Chris Redfield and Jill Valentine.

Mansion Incident and move to Canada

Prior to 24 July 1998, S.T.A.R.S. captain Albert Wesker take Kathy and her two daughters hostage to manipulate Barry to help him to remove all evidence harmful to Umbrella Corporation during the Spencer mansion viral outbreak. Soon after the incident, upon his return from the Arklay Mountains with the remaining S.T.A.R.S. members, Barry took Kathy and their children to Canada where they would be safe.[1] However, in late September, shortly after settling in, Kathy and her daughters had to say goodbye to Barry who left, with the accounts differing if he returned to Raccoon City to rescue Jill from the outbreak that destroyed the city in early October or left for Europe to support Chris in investigating Umbrella.[2][3][4]

Over the years, after Umbrella's bankruptcy and Barry's retirement to be with his family, Kathy lived a quiet life that was closer to her husband. However, after the incident that his daughters had with Barry's M1911 handgun, which caused Polly to be injured and caused Moira to walk away from her father, the family's relationship became strained. In 2009, with Barry leaving retirement to become a BSAA advisor at the request of Chris and Jill, Kathy and her family contacted Chris's sister Claire, who due to her relationship with Moira, made her daughter join TerraSave in 2011.[5][6]

It is not known how Kathy acted when she learned that TerraSave headquarters was attacked and Moira was kidnapped, but she possibly worried too much during the six months that Moira was missing until her husband would rescue her on Sejm Island amid an outbreak that decimated the entire region, along with Natalia Korda, that the family adopted.

In 2013, two years after the incident, Kathy and her family were preparing to receive Claire's visit.

Kathy with her husband and children in the original Resident Evil. 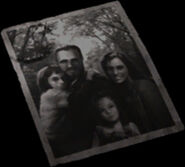 The version of the family photo Barry carries in the remake.

Kathy with her family in "Barry's Epilogue" from Resident Evil 3: Nemesis.