Keith Lumley is a Special Operations Agent that served under the BSAA's European branch of operations under the call sign of "Grinder".

In 2005, Keith, along with his partner Quint Cetcham, was deployed by Clive R. O'Brian to infiltrate and investigate the Valkoinen Mökki Airport. There, they witnessed a Veltro agent violently mauled to death by a Farfarello B.O.W., which allowed them to obtain the key for the crashed airplane's computer. After collecting the key, they made their way to the crash site, previously visited by Jessica Sherawat and Chris Redfield.

There they met even more Farfarello and the Fenrir B.O.W.. After defeating the creatures, they used the key to access the airplane's computer, allowing them to report back to headquarters, telling the director the coordinates of the ship that Jill Valentine and Parker Luciani were supposedly on board. O'Brian then informs Jessica and Chris of the situation and sends them on a rescue mission.

They later return to the airport to hack into the computers, where Keith is forced to take on a horde of Farfarello, Fenrir, and ordinary Hunters, while Quint tries to access the data. After surviving the waves of B.O.W.s, Quint finally puts all the information together, and realizes that the mastermind behind the whole Veltro revival act was none other than director O'Brian himself to put heat on FBC's Morgan Lansdale.

An ordered air strike bombing the airport is then initiated, with Quint & Keith barely making it out alive. In the end, Keith and Quint are revealed to have escaped the bombing, and Keith was later assigned as a leader of BSAA's East African branch.

Keith is a playable character in Raid Mode. His Costume #1 (Snow Gear) is unlocked along with Raid Mode stages 8–12 by completing the Mission "Chapter 2" which is done by clearing Episodes 4-6 of the Campaign (3DS, Port).

His Costume #2 (Headquarters Uniform) is unlocked by completing the 50 missions (3DS), or by clearing all of Raid Mode's "Chasm" difficulty stages with S rank.

Keith's physical attack is a Kukri Combo. If fully charged, he will perform 3 Kukri hits. Otherwise, he will only perform 2. His melee subweapon are his two Kukris and has a quick double Kukri swing.

Keith is an obtainable diorama figure on Resident Evil.NET awarded as a random prize through using a Genesis Scratchcard. 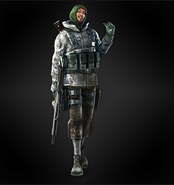 An unlockable outfit for Keith in the Unveiled Edition. 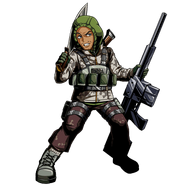 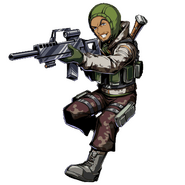 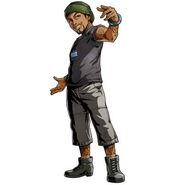 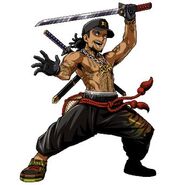 ditto
Add a photo to this gallery

Retrieved from "https://residentevil.fandom.com/wiki/Keith_Lumley?oldid=793096"
Community content is available under CC-BY-SA unless otherwise noted.