The army of the Kijuju Autonomous Zone was responsible for the defence of the West African territory from foreign intervention. As tensions inside the community increased, a wall topped with barbed wire was erected to protect others from the growing uncivility. Operating at checkpoints, the army was authorized to allow the BSAA entry into the perimeter during their investigation relating to Ricardo Irving's bio-weapon deals.

Their weapons consisted of AK-74s and other Soviet-era weapons. 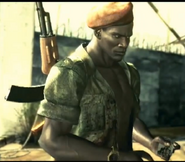 A close-up of the soldier.

The main checkpoint with the same soldier.
Add a photo to this gallery
Retrieved from "https://residentevil.fandom.com/wiki/Kijujian_Army?oldid=651047"
Community content is available under CC-BY-SA unless otherwise noted.