Kirk "Hat Trick" Mathison (カーク・マシソン?) was an operative of the Bioterrorism Security Assessment Alliance (BSAA) and a member of the Air Support Platoon,[2][excerpt 1] serving as one of their helicopter pilots.

In 2005, Mathison was sent to rescue the BSAA operatives named Chris Redfield and Jill Valentine from a B.O.W. called the Malacoda on the Queen Zenobia, providing them with air support. With his help, the two managed to subdue the beast. Afterward, he flew them to the remains of the Queen Dido and returned them to the BSAA Headquarters.

In 2009, Mathison provided air support for the BSAA operatives named Chris Redfield and Sheva Alomar during the incident in Kijuju. His helicopter was attacked by the flying Kipepeo creatures, causing him to crash. Upon investigating the crash site, Chris and Sheva found his dead body burning with the helicopter. 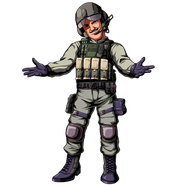