Resident Evil 4
The Knife is a weapon that used as its own command in Resident Evil 4. The knife is also used in major battles such as the El Gigante fights, the cutscene fight with Jack Krauser, and the final encounter with Osmund Saddler. After Ada Wong saves Leon from Krauser by shooting his (Krauser's) knife from his hand, Leon keeps it, and Krauser replaces it with an identical one. After finding Ada captured by Saddler, Leon uses Krauser's knife to cut Ada down.

During the Main game, the knife is always available for Leon, does not take up space in his inventory, and is mapped to a different button than Leon's currently equipped firearm.

When Leon is equipped with his Special Costume 2, Leon uses a silver switchblade with jewels set in it. This knife is a double edge stiletto.

Leon, Krauser, and Ada are the only characters to use a knife in The Main Game, and The Mercenaries. In the Mercenaries, Krauser wields his knife; differently, he holds the grip with the blade facing the opposite direction. His knife attack also has a wide range, giving him the advantage of hitting enemies around him.

Ada's knife is usable in Separate Ways only in the PS2/PC 2007 Port, and it's not available in the GameCube version due to the apparent lack of Separate Ways, however starting with the Wii and all later versions it is now usable through the whole game modes, including Assignment Ada and The Mercenaries.

Ada uses a folding knife. Ada's knife is some rotational lock-in knife where the knife is tucked inside the grip itself, most notably via the model and in one cutscene where Ada grabs her knife, unlocks it and stabs Leon with it in self-defense.

The player can automatically use the knife by swinging the Wii remote, prepping it by holding the L button or holding down the L1 button.

Through normal gameplay, it is used against Los Ganados, as well as to break open boxes that may contain useful items (or snakes).

A player can hit away projectiles like arrows and scythes with just a knife swing. The knife does a considerable amount of damage to Krauser in his mutated form in the main game, Assignment Ada, and Separate Ways, taking only a handful of hits to defeat him. This also applies to Saddler in Separate Ways. 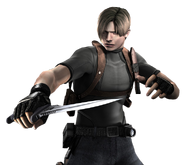 Early version of the RE4 inventory showing the knife.
Add a photo to this gallery
Retrieved from "https://residentevil.fandom.com/wiki/Knife_(RE4)?oldid=844326"
Community content is available under CC-BY-SA unless otherwise noted.