For other uses, see Knife.

The Knife is a weapon in Resident Evil: Revelations 2. In the campaign, Claire gains hers very early in Episode 1: Penal Colony and Barry starts out with it, Natalia can't use a knife but Moira is able to use the Katana after it's unlocked, which acts similarly to the knife. In Raid Mode, all characters have a knife by default.

The knife makes little sweeps, in the campaign, just 3 swipes can take care of a Rotten on Casual difficulty and 5 on Normal, making it good for a backup weapon against them. The Giant Whip Spider is also a good target because they each have only 1HP,[1] so any type of damage will instantly kill them. It is highly suggested to not use them against higher tier enemies such as the Revenant, Glasps or bosses due to their ability to deal great amounts of damage quickly at close range.

However, any enemy hit with a stealth attack (which uses the knife) will be killed in one shot, including Revenants and Ironheads. Additionally, every episode features at least one medal related to killing a certain amount of enemies with the knife.

In Raid Mode, the knife is generally not a good weapon to use in higher difficulties depending on the character's level, unless certain skills are equipped which increase the knife speed, damage, or just replaces the knife with the Katana. Stealth attacks will also not kill enemies in one shot in most situations.

In the campaign, there are 4 skills related to the knife:

In the Raid Mode, there are 3 skills that also improve the knife:

There are also 3 campaign records related to the knife: 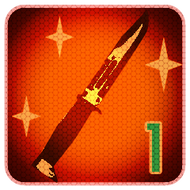 Retrieved from "https://residentevil.fandom.com/wiki/Knife_(Revelations_2)?oldid=776669"
Community content is available under CC-BY-SA unless otherwise noted.