The bow itself appears as some type of modern-day compound bow. Krauser is seen using his bow in the maingame when Leon Scott Kennedy has to collect the holy beast pieces from him. He uses the bow to fire arrows with timed explosives attached to them from a distance.

In the Mercenaries minigame, Jack Krauser uses his bow as his primary weapon, using arrows as ammunition. The weapon's HUD shows the player's total number of arrows (which are stacked in groups of 20); it does not need to be reloaded as such (a new arrow is put to the string after each shot). Unlike the bow used during the single player fight, the arrows are not explosive-tipped. The bow has a laser sight, and shots travel in a straight line without experiencing arc. It takes up 3x7 (21) spaces of his inventory.

It will instantly kill a normal Ganado in most cases. While this is true for the Gamecube version, in other console releases, enemies sometimes need to be shot twice or even thrice. Shots have a high critical rate and can break shields with a single arrow.

These stats are only shown in the Gamecube Japanese and US releases.

His bow appears again with the display name changed to Bow & Arrow. It is part of Krauser's default loadout along with a rocket launcher and his personal knife.

His bow functions very similarly as it did in Resident Evil 4. The major difference is it now has infinite ammo, not requiring the player to find and pick up any arrows now.

The bow takes approximately one to two shots in vital areas to kill Town Majini, three to four arrows for standard Zealots, and two arrows to break shields.

Krauser using his bow in The Mercenaries 3D. 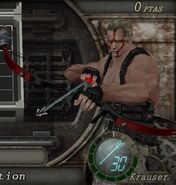 Krauser holding his bow in Resident Evil 4
Add a photo to this gallery
Retrieved from "https://residentevil.fandom.com/wiki/Krauser%27s_Bow?oldid=776672"
Community content is available under CC-BY-SA unless otherwise noted.