Start a Wiki
watch 02:17
The Loop (Games)
Do you like this video?
DeCandido universe
(DeCandido's novelizations of the Anderson films)

Las Vegas, Nevada was a major city in the American state of Nevada.

After the 2002 global T-virus pandemic, the city was engulfed by the expanding deserts as a result of nobody being around to keep the sand back. In 2007, it was the site of a battle between the Umbrella Corporation's enhanced mutant zombies and a convoy of survivors under Claire Redfield. 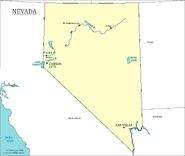 Retrieved from "https://residentevil.fandom.com/wiki/Las_Vegas,_Nevada?oldid=766576"
Community content is available under CC-BY-SA unless otherwise noted.