Leon S. Kennedy was a Raccoon City police officer who was caught up in the 1998 viral outbreak in Raccoon City.

Leon S. Kennedy is Italian-American, having emigrated to America from Italy at some point in his life.[3] He also has a pet bloodhound.[3][Excerpt 1] Leon is a rookie police officer at the Raccoon City Police Department, working under his superior officer, Roy, and the chief of police, Brian Irons.[4][5] Another of Leon's colleagues is an officer named Marvin.[4]

Following the events of the Umbrella incident in the Arklay Mountains, a leak from an Umbrella facility within Raccoon City had caused a t-Virus (Clay virus ε-strain) outbreak.[7]

Only a few days after Leon began his position at the R.P.D., Raccoon City had been consumed by death.[8] In a matter of time, the precinct was overflowing with zombies.[8][9] Leon and his fellow surviving officers had barricaded themselves on the third floor of the precinct, where Chief Irons' office is located.[8][9] After witnessing a helicopter crash from the rooftop of the precinct, Leon speaks with the Chief who insists that he focus on his own survival.[10][11][12][Excerpt 2] Leon realizes that his only hope for survival is to brave the hordes of zombies below and to venture out on his own.[Excerpt 3]

Leon finds an Umbrella researcher, Ada Wong, who was wounded and trapped in a crashed and burning police van in Outside B (外B, SOTO B?); he saves her with the fire extinguisher and takes her to where he can repair her injuries.

Leon later sees Sherry Birkin crawl down a drain from the vehicle workshop ("CHIKA CYUU B") in the garage basement.

In the next room, an underground parking lot ("CHIKA CYUU A"), Leon finds Ada on her own and scolds her for leaving Marvin. She explains that she heard a noise and left Marvin to go investigate. The noise is revealed to have come from a crashed Umbrella van, and two gorilla B.O.W.s break out. Leon calls Ada to hide in a patrol car as he fights them.

Later, The trio decide to escape through the sewers, they climb down the sewers and after a brief discussion Ada runs forward and is followed by Marvin.[6]

While exploring the sewers, Leon narrowly escapes a torrent of running water and encounters various mutations on the way.

After losing track of Ada, Leon and Marvin exit into the Factory compound's SITE A (敷地A, SHIKICHI A?), where they find the entire remaining police force - the large investigation team assigned to the factory - has been killed in a battle. Heading into a Warehouse (倉庫, SOUKO?), Leon fights the mutated William Birkin, who was recently knocked out by Elza. The three take the elevator down to the lab, and Marvin gets injured by William in the process. Ada and Leon take Marvin to the GUARDHOUSE to recover. There, she reveals that she is in fact an Umbrella researcher, but tells Leon he doesn't have time to worry about that; Marvin is at risk of dying if not treated immediately. Ada conscripts Leon to reactivate the lab's power and take the delicate vial of the viral strain to a machine which will create an appropriate vaccine. When he has cured Marvin, Ada will wait for the two of them in the shelters below, though makes no guarantee they will survive down there.

Leon has stylish auburn hair and brown eyes.[13] In his early casual appearance, Leon wears a blue, white, and black jacket with a back design and a black shirt underneath.[5] He wears two necklaces—one with a pendant made out of sheep bone and one with a miniature replica of Mjölnir.[14] He also wears blue jeans, a belt with a round single hook buckle and a knife sheath attached at the back, and black and white boots.[5][14][Note 2]

In Leon's main design, he wears his R.P.D. uniform which consists of an all blue shirt and pants, with a lighter blue undershirt. He wears armor on his shoulders, chest, and back and elbow pads. His knife is strapped to his right leg. He wears gray boots and black gloves. Over the course of the outbreak, Leon also wears a red R.P.D. tactical vest and white U.S.S. upper body armor, both with an additional pair of knee pads. As Leon takes damage, his appearance diminishes and he begins to appear bloody and disheveled.

In the earliest known production stages of BIOHAZARD 1.5, the protagonist was a young man named "Grant Bitman" (グラント・ビットマン, guranto bittoman?).[15][Note 3] Once development of the game began, the character was renamed to "Leon S. Kennedy" (レオン・S・ケネディ, reon S kenedi?).[15][Note 4] At this stage, Leon had a shorter hairstyle and two outfits: a more casual appearance with a white T-shirt that displayed the R.P.D.'s emblem on each sleeve, a shoulder holster, a pair of blue jeans, black tactical gloves, and black leather boots; and an R.P.D. uniform concept with a short-sleeved white undershirt, a blue button-up shirt, a black tactical vest, blue pants, a thigh strap, black tactical boots, and black tactical gloves. The latter served as the basis for Leon's final design.

In the first builds of 1.5, several placeholder sounds from Resident Evil were used for the game. This included character sounds for Chris Redfield and Jill Valentine, which were assigned to Leon and Elza respectively. By December 1996, voice acting for the characters and title calling had begun and was being implemented in-game.[16][Note 5] Paul Haddad, Leon's actor in the final build of Resident Evil 2, has stated that he worked on an earlier version of the game.[17][Excerpt 4] Whether this was for BIOHAZARD 1.5 or an earlier build of the final Resident Evil 2 is undetermined. 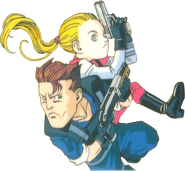 Leon and Elza artwork by Katsuyoshi Nakatsuru from the cover of V-Jump's V-Fest '96 Video VHS tape.

Leon with the cast of the prototype (pre-November 1996 build) from the Resident Evil 2 (PC/Dreamcast) Gallery.

A second version of the cast image showcasing character heights instead of names from Resident Evil Archives.

A variation of Leon's early casual design from the Resident Evil 2 (PC/Dreamcast) Gallery.

Leon with his bloodhound from the Resident Evil 2 (PC/Dreamcast) Gallery. 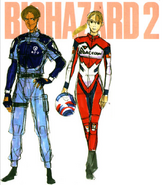 A rough sketch of Leon's redesign prior to the November 1996 build from the CFC STYLE FAN-BOOK Vol. 2.

Leon's R.P.D. uniform with a prototype emblem from the Resident Evil 2 (PC/Dreamcast) Gallery. 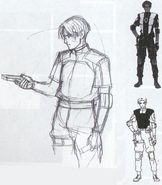 Leon's (near) final design from the Resident Evil 2 (PC/Dreamcast) Gallery.

Leon in the final U.S.S. armor from the Resident Evil 2 (PC/Dreamcast) Gallery.

Leon's R.P.D. and U.S.S. armor. Similar artwork is found in Resident Evil Archives.
Add a photo to this gallery

Leon's cutscene with Ada in the November 1996 build; Line 1.

Line 3.
Add a photo to this gallery 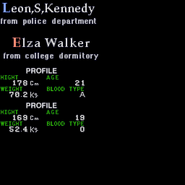 Chris Redfield's alternate costume in the Sega Saturn port of Resident Evil has a similar appearance to the early R.P.D. uniform concept Leon wore.
Add a photo to this gallery

Retrieved from "https://residentevil.fandom.com/wiki/Leon_S._Kennedy_(BIOHAZARD_1.5)?oldid=771145"
Community content is available under CC-BY-SA unless otherwise noted.