View source
watch 02:58
No Man's Sky Update - The Loop
Do you like this video?
Play Sound
Johannes Roberts
(Welcome to Raccoon City continuity)

Leon S. Kennedy is an American police officer who was attached to the Raccoon Police Department.

Kennedy followed his father, a well respected officer, into the law enforcement career. After an incident in training where his gun accidentally discharged and injured his partner, Kennedy was nearly kicked from the police academy. Leon's father used his influence to intervene. As Leon had otherwise completed the entire course adequately, it was decided that instead of expulsion, Leon would be transferred from the big city to a department in the local community of Raccoon City, a dying company town situated in the Arklay Mountains.

This out-of-town reassignment complicated his life, causing his girlfriend to break up with him the night before his first night working the graveyard shift. This led the depressed rookie to drown his sorrows with alcohol in a local motel. As such, Leon awoke late and extremely hungover for his first day at work.[2]

Leon made his way to Emmy's Diner in hopes of sobering up with coffee but fell asleep at the counter. He was lightly teased by fellow S.T.A.R.S. officers, Albert Wesker and Jill Valentine and bullied by officer Kevin Dooley (the latter of whom had learned of his incident at the academy). After the officers left, Jill approached Leon and confided that they were good people once he got to know them. Leon also began to witness disturbing signs of the pathogen spreading throughout the community when the diner's waitress Louise began bleeding from her right eye and an infected crow flew into the diner window.

At midnight, Leon was one of only a handful of officers present at the station when the sirens began to go off around the city. Having overheard the Chief of Police, Brian Irons, when he ordered "everyone" into the briefing room, Leon was present for the S.T.A.R.S. briefing on the disappearance of Dooley and Marini near the Spencer Mansion. Irons was furious when he finally took notice of Leon's presence in the room and mocked the rookie, instructing him to station at the front desk.

An hour later, Leon was still posted at the front desk as the city began to descend into chaos. Having fallen asleep listening to his walkman at full volume, Kennedy was barely startled by the explosion of the tanker outside of the station's front gates until the zombified driver had emerged from the vehicle and wandered into the main hall where it was terminated by Irons. The loud bang of the gunshot scared Leon awake and the Chief promptly ordered Kennedy to extinguish the body and seal the front gates before "more" show up.

Shortly after, Kennedy approached Irons in his office, hoping for further information about the man in the lobby and any information about what was going on in the city. He instead found his superior hastily packing up several of his belongings. Irons mocked Leon's naiveté and when Leon suggested calling for help, informed him that all the phone lines in the city had been cut. Leon followed Irons down to his car in the stations basement parking, attempting to convince the chief to stay or instruct the situation, but Irons shoved him off, sarcastically promoting him to chief before driving off, leaving Leon to manage the police station by his lonesome.

Later, after failing to escape the city, Irons returned to the station's parking lot, only to be attacked by a zombified doberman. Irons fired off several shots before being saved by civilian Claire Redfield, who killed the animal with repeated blows from a fire extinguisher. Leon quickly rushed down to the parking lot having heard gunfire and emerged through the door, aiming his firearm at Claire, and ordering her to drop her weapon. Claire dropped the fire extinguisher and ignoring Leon, walked into the station. Irons, getting up from the floor, berated the tense rookie.

The trio returned to the main hall, taking notice of the amassing horde of zombies crowding at the main gate and the burnt corpse, Leon demanded to know what was happening to the people in the city. Irons stated that their only option left was to hold out, as all the roads out of the city had been blocked by armed guards of the Umbrella Corporation. Claire questioned the location of her brother Chris, a S.T.A.R.S. member, and Irons informed her of his current mission in the cities outer limits. Irons, realizing he could contact the team's pilot for potential evacuation, suggested the two load up at the station's armory while he returned to his office.

Arriving in the armory to find the room nearly empty, Leon informs Claire that he's never seen the room before, but still manages to find several boxes of ammunition and a pump-action shotgun which he gives to the unarmed woman while she hands him an RPD tactical vest. Impressed by her handling of the firearm, Claire informs Leon of her background: growing up in Raccoon before leaving and struggling to survive on her own. However, their interaction is cut short by the sounds of someone calling for help. Claire suggests Leon go and investigate since he's an officer, and Leon follows the staircase beyond the door to the stations holding cell where he comes across independent journalist Ben Bertolucci.

Ben desperately pleads with Leon to unlock the cell, as his cellmate is quickly succumbing to the effects of the virus and on the verge of zombification. Leon however is extremely hesitant, not knowing why Ben was locked up. Ben becomes equally suspicious of Leon's good health and assumes that Umbrella had vaccinated the police force. During their interaction, Leon wanders too close to the cell, allowing Ben to pull him against the door and grab his gun. Leon slowly and nervously searches the desk for the cell keys while attempting to deescalate the situation. Leon finally manages to find the keys and unlock the door when the cellmate attacks and kills Ben. The zombie turns its attention to Leon, who is still unarmed and unable to fight or reason with the creature. He is then saved by Claire who is saddened and distraught at the sight of Ben and hands Leon his gun, telling him to get his shit together and leaves. Just as the zombie gets up from the floor once more, Leon, upset at his previous incompetence and inability to save Ben, fires several rounds into the zombie, killing it. Claire returns and notices the zombie. Leon, sternly and casually reloads his gun, ready to leave town.

Leon and Claire return to the main lobby where they spot Irons, who states he was unable to make contact with the chopper. The front gates of the RPD give way and the zombies mount their offensive on the station, quickly breaking through the front doors. Irons, suggesting there may be another way to escape the city into the Arklay Mountains, leads the duo through to the back of the station, barely escaping with the mob of undead following close behind.

4 AM. With the police station now lost, Kennedy and Redfield follow Irons as they make their way to Raccoon City Orphanage, Claire is disturbed to be returning to the facility which she barely escaped from as a child. Irons informs her that the orphanage, which has been shut down for sometime, houses a secret passage that connects to the Spencer Mansion. The duo enter the building and Claire confronts Irons about his involvement with Umbrella. Leon takes notice of something slowly moving in the darkness of the ceiling, causing the lights to sway. He turns around and is confronted by Lisa Trevor. Leon points his gun at Lisa and calls out to the other survivors, as Lisa shushes him and warns him to look above. Claire finishes her argument with Irons and begins to head over to Leon, when Lisa disappears and Irons is snatched up by a long tongue of a creature that viciously kills him. As his lifeless body drops to the floor, Leon screams at Claire to run and the creature begins to chase after them, it manages to ensnare Leon's leg with its whip-like tongue while Claire fires several shots at the monster, to no avail. Leon is saved by Lisa, who attacks the creature and the two engage in brutal combat. Afterwards, Lisa helps lead the two to a room that contains a wall painting of the mansion, and a keyhole, she hands Claire the keys and upon turning it, the wall opens up to reveal a secret elevator leading deep underground to Umbrella's archives and abandoned laboratories.

Searching through the long narrow corridors and archival rooms, Leon and Claire find a room detailing the experiments on children from the orphanage, with Leon uncovering a book that contains information on the various tests conducted on Lisa over the last forty years. Claire knocks the documents to the floor in anger and Leon comforts her. The two continue through the miles of corridors in the facility, eventually stumbling across a power generator room where they encounter Chris being attacked by a heavily mutated William Birkin which Claire dispatches with her shotgun. Claire and Chris reunite and he informs them that Umbrella plans to destroy the entire city, the trio meet up with Jill and Birkin's daughter Sherry and board the ALC-5000 that leads out of Raccoon City to the otherside of the mountains. Claire helps an injured Chris sit in the train's carriage while Leon joins Jill at the front figure out how to operate the locomotive. The train starts moving just as time runs out and Umbrella begins the destruction of its assets, sterilizing Raccoon City and imploding all it's extraneous and subterranean facilities, causing the tunnels around the train to collapse. Thankfully, the train, near enough to the exit, manages to survive the collapse with limited harm to the survivors. Unfortunately, Birkin returns, now fully mutated beyond humanity, Leon takes notice of the commotion and grabs a ATM-4 rocket launcher contained in the train's first class. He uses it to terminate Birkin once and for all. Some moments later, Leon and the other survivors having escaped the rubble, emerge out the end of the tunnel unbeknownst to Umbrella.

According to an interview with director Johannes Roberts, the character was written as "a cross between Jack Burton and MacReady" and will play an equally lead role to Jill, Claire, Chris, and Wesker in the film.

Roberts described Leon as the "trickiest role to cast" with multiple actors being auditioned for the role prior and claimed that Canadian actor Avan Jogia was the only one who "really nailed it" in capturing the character's balance of humor and disheveled weariness. In discussing accusations of forced diversity, Roberts stated he just "wanted to resist the trap of casting someone because they just happened to look like their character" but lacked the "spirit and energy of that character".

"I wanted to move away from the buff action hero that Leon has become in the later games and return to the Leon Kennedy of his very first ‘rookie’ incarnation in Resident Evil 2. In this movie he is not at all an action hero - he's slightly out of his depth, very hungover, and cannot believe the s**t that is going down on his first day."

Roberts stated that the events of the film will help create the "hero Leon" they know from the later games.[3]

Leon looking from the window inside Emmy's diner.

Leon looking back at the RPD station.

Leon holding a gun while looking back at Claire.

Leon and Claire inside the Orphanage.

Leon in the Motel

Leon is saved by Claire 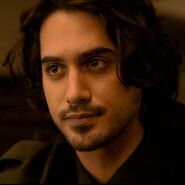