Start a Wiki
watch 02:17
The Loop (Games)
Do you like this video?
Wildstorm universe
(Covers information from the D.C. comics)

Leon S. Kennedy[note 1] was a rookie police officer assigned to Raccoon City. He later allied himself with anti-Umbrella organizations, some of whom affiliated with the US military.

Leon was offered an assignment in Raccoon City thanks to the planning of Chris Redfield, who wanted someone capable of investigating Umbrella to be in the city's police force after he left.[1]

After the Raccoon City outbreak, Leon began moving around the country fighting Umbrella's creations. At one point he investigated the Nevada town of Saguaro Wells near Elko, where strange disfirst over a fortnight culminated in an attack on a boy by "bat-like creatures". With everyone in town staying inside as part of a curfew, Leon was left as the only potential target. After a short fight with the creatures, Leon was knocked unconscious and taken to a cave being used by Umbrella as a command center.

After Dr. Callos ordered Vedley's death, Leon deciphered that sonic equipment could be used to subdue the B.O.W.s. Waiting for the B.O.W.s to be sent out, Leon ran into the facility and began tampering with the controls, ordering them the bats to be sent back. With the machine destabilizing, the bats were free to enact vengeance on Callos and the researchers for killing them for failed missions. Escaping the facility, Leon was picked up by a helicopter just before the US Air Force conducted an air strike. With yet another base taken out, Leon was given orders to proceed to Sector 36-A to deal with a G-Virus outbreak.[2]

At some point he teamed up with Claire Redfield once again, to locate Chris in Europe. They found Chris and his S.T.A.R.S. comrades at Queck Castle in Füssen, Bavaria, moments after they had taken out an Umbrella base within the castle.[3] 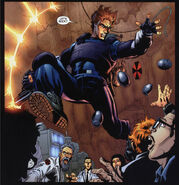 Retrieved from "https://residentevil.fandom.com/wiki/Leon_S._Kennedy_(WildStorm)?oldid=619348"
Community content is available under CC-BY-SA unless otherwise noted.