Leonardo Lupu was a resident of the snowy village in an Eastern Europe mountain range and he is the father of a villager girl named Elena Lupu.

Leonardo and his daughter Elena have been traversing around the Village in an effort to get inside to Luiza's House. On the way, he was attacked and subsequently infected by the Lycans, losing a lot of blood on the way, they take shelter in a nearby hut, when they encounter Ethan Winters, who is searching for his missing daughter, he noticed the two of them. They are initially distrustful of him with Leonardo raising the machete at him in defense. After he reassures him that he is here to help, Ethan manages to open the front gate with Elena hurriedly carrying him to the house. Leonardo then chastises Ethan for taking his time for which Elena apologizes saying that he is not used to relying on other people.

After they are let in by Luiza into her house, another drunken villager, Anton, chastises her for bringing him and Ethan into the house. Shortly after, they all join hands and start praying for their protection. When Ethan brings up the old woman from the graveyard, Leonardo remarks of her as "an old bitch", who is "crazy as a bag of rats." Suddenly he begins to roar in pain as he starts showing the first symptoms of transforming into a Lycan and knocks down the lantern which sets fire to the whole house. He then strikes the machete to Luiza's chest, killing her instantly, and starts to slaughter everyone else in the building with the exception of Ethan and Elena, who manage to escape. The crazed Leonardo chases and pounces on Ethan and prepares to kill him until Elena steps in and shoots him with the shotgun.

When Ethan and Elena manage to reach to the attic, Leonardo reappears. He then calls out Elena's name in pain, causing her to run over to him but the plank she crosses breaks, separating them from Ethan. Afterwards, the planks supporting the two of them gave out, sending Leonardo and his daughter into the fiery depths below. 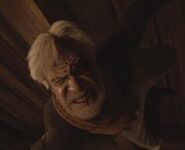