The liaison was a man who Ada Wong was originally assigned to meet after acquiring a G-Virus sample. Unfortunately, he lost his will and killed himself at the Apple Inn before Ada could get to him.[1]

He was a white haired man and was wearing a black suit at the time of his death. 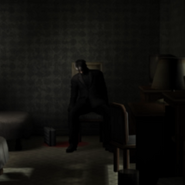 Full body of the liaison
Add a photo to this gallery

Retrieved from "https://residentevil.fandom.com/wiki/Liaison?oldid=730542"
Community content is available under CC-BY-SA unless otherwise noted.