Though Lickers are human in origin the extent of their mutations makes them noticeably different. In Zombies, the skin becomes necrotic and comes apart and the muscles, though strengthened, ultimately deteriorate as well. During the V-ACT process, any remaining skin is shed off, exposing the muscles. New muscle growth also takes place, giving Lickers considerably stronger fighting abilities than Zombies. The skeleton is altered during the mutations, forcing Lickers to walk on all-fours. This body shape allows them to become agile hunters that can jump at prey. Similarly, their claws are strong enough that they can cling to walls and ceilings, allowing them to stalk prey below them.[1] The eyes cease to function or are lost entirely, though the Lickers' sense of hearing is greatly increased to make-up for the loss.[2][excerpt 1] The Lickers' tongue has also developed to be several feet long, and is powerful enough to be used as a weapon capable of slicing into flesh. 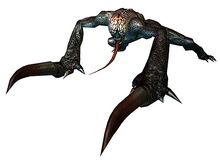 The Modified Lickers were a variety which existed within NEST during the 1998 outbreak. Their exact origins are unknown, whether they were genetically altered Lickers created by technicians, the mutant variety of Modified Zombies, or Lickers which mutated after surviving exposure to P-Epsilon gas. What is known of them on a biological level is that they had a blue tint, and were considerably larger than the 'normal' Licker variety. They were more durable, and one of the fingers mutated to grow a large claw.[3]

This creature, either an irregular mutation or a zombie in mid-transformation, was encountered by a group of survivors in the Apple Inn during a fire. This creature was dubbed "Suspended". The subject was clearly a woman prior to infection judging by its remaining clothes, features and body shape, despite the half-transformed state. It did not yet have the ability to decapitate its prey using its already mutated tongue, but displayed the ability to use its tongue as a whip against attackers. Its eyes were also still functional, although its hearing was sensitive enough that loud noises caused it distress.

A slightly modified variant of this B.O.W. was created by Tricell in response to the high black market demand for Lickers, usually bought by wealthy terrorists for their durability and intelligence. This Licker variant was created by injecting the Progenitor virus into standard Lickers to increase their evolutionary potential. While this did not solve the sight problem all Lickers share, it did increase their sense of hearing and smell slightly, as well as giving them the ability to reproduce. This enhanced version was encountered by Chris Redfield and Sheva Alomar in the Uroboros Laboratory.

Retrieved from "https://residentevil.fandom.com/wiki/Licker/biology?oldid=780654"
Community content is available under CC-BY-SA unless otherwise noted.