The Lightning Hawk is a weapon in the Resident Evil 2 remake. This weapon is only retrievable in Leon's campaign.

Using .50 caliber ammunition, it is one of the most powerful weapons Leon is capable of wielding. With very high base damage and a high chance of criticals on nearly every target it fires upon, it is a formidable weapon when shot accurately. It is also capable of piercing through multiple enemies in a row, making it highly effective against crowded zombies. Its exceptional firepower makes it perfectly suitable for difficult targets such as the G-Adults's eyeball or boss monsters.

As a 7-round semi-automatic magnum pistol, it is well suited for quick reloading on the move. Its only weaknesses are its relatively high recoil, making chaining shots challenging, and rare ammunition. As a result, taking care to shoot and knowing when to use it are crucial to wielding it effectively. MAG Ammo is not commonly found in-game, but combining two High-Grade Gunpowder (Yellow) does create ammo for it.

Leon can later upgrade it with a Long Barrel to further increase its already devastating firepower, and the Red Dot Sight which makes the weapon focus faster. 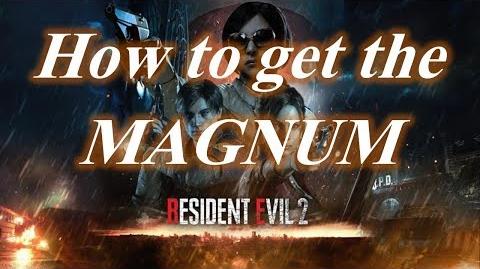 Lightning Hawk before update 1.03
Add a photo to this gallery
Retrieved from "https://residentevil.fandom.com/wiki/Lightning_Hawk_(RE2_remake)?oldid=848394"
Community content is available under CC-BY-SA unless otherwise noted.