An anti-B.O.W. weapon developed by Umbrella that was being stored at the Antarctic Base.

The Linear Launcher, which from the name is supposed to be a mass driver (a linear motor), fires a large blue lightning ball-like projectile. It is very powerful, capable of vaporizing the mutated Alexia Ashford in a single hit. It does however require time to charge for use, and a slight delay to recharge if the shot misses.

The Linear Launcher is normally only available after Alexia transforms into her final form in which it will destroy it in one hit. However, Alexia can be very difficult to hit with it because of her quick movements. In Battle Game, it can take out just about any enemy in one hit. An exception being Gulp Worm which can take more than one.

It is also an unlockable weapon in Code: Veronica, it is obtained after beating the Battle Game with A rank with all the characters. It can only be used in Battle Game however.

If the player obtained all the jewels in the Arcade Mode, after defeating the Tyrant in Stage 5, Nemesis T-Type will appear and the Linear Launcher is the only weapon capable of killing him. Chris also uses this weapon in the Dungeon Mode. It has infinite ammo. To unlock him, the player has to fully complete clock tower map. It can also be used by Claire and Steve after Vs. Roach Mode is fully completed.[1] 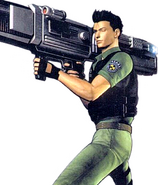