This page is a list of references to the band Queen in Resident Evil.

Made in Heaven part of a reoccurring art piece design. The design was inspired by track 2 of the Queen album, Made in Heaven.[citation needed]

The design is featured on a number of products from jackets to Zippo lighters. A leather "Made in Heaven" Zippo was released as part of the promotion for the original Resident Evil in Japan. Three colour versions were produced in 1998 to be sold alongside Resident Evil 2.[1] Hong Kong toy makers also created similar lighters to advertise their manhua. One of the runner up designs for the 2nd Stage portion of the In-Game T-Shirt Contest for the HD Remaster version of Resident Evil 0, "Maiden in Heaven", was a reference to this design. 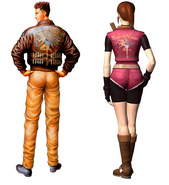 Original artwork of Chris and Claire wearing the design.

Chris wearing the design in the remake. 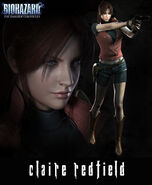 Artwork of the design.

The design in Operation Raccoon City. 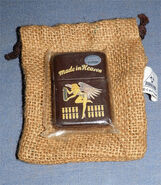 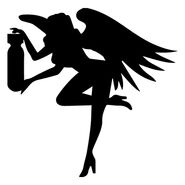 Let Me Live is a jacket decal worn by Claire Redfield, originally featured in Resident Evil 2 and Resident Evil CODE:Veronica. The decal was inspired by track 3 of the Queen album, Made in Heaven.[citation needed] Other references to the album include Made in Heaven and Mother Love.

In Resident Evil 2, the decal appeared on the back of Claire's leather jacket costume. It was unlocked using the Special Key.

In CODE:Veronica, Claire wore the decal on the back of her vest in her standard outfit. Her standard outfit was redesigned for Resident Evil: The Darkside Chronicles and the decal remained. This redesign has been featured in subsequent games in the series starring Claire.

The decal on the jacket in Resident Evil 2. 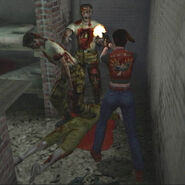 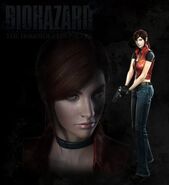 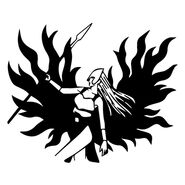 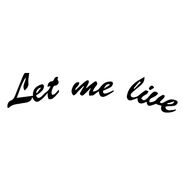 Umbrella Corps decal 2
Add a photo to this gallery

Mother Love is a tattoo on Billy Coen originally featured in Resident Evil 0. The decal was inspired by track 4 of the Queen album, Made in Heaven.[citation needed] Other references to the album include Made in Heaven and Let Me Live.

In Resident Evil 0, Billy had a tribal tattoo sleeve spelling the phrase "Mother Love". Billy's tattoo was present in the original Nintendo 64 prototype and made a return in the Zero retelling in Resident Evil: The Umbrella Chronicles.

The tattoo in the prototype. 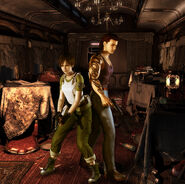 Retrieved from "https://residentevil.fandom.com/wiki/List_of_Queen_references?oldid=862938"
Community content is available under CC-BY-SA unless otherwise noted.