This is a list of all the survivor encounters in Resident Evil 3: Nemesis.

At the beginning of the game, when passing by the Boutique road for the first time, you will hear a man screaming in pain. More forward in the alleyway that leads to the backdoor of Bar Jack, you'll find out that the civilian is already dead, being devoured by two zombies. No matter how fast you are, the man will always be dead when reaching him.

When the two zombies see Jill, they immediately lose interest on the man's corpse and attack her. If you wait some time in the area (around 60 seconds), he will awaken as a zombie and attack Jill. If you leave this area without killing him and re-enter after, his zombie will appear next to the place where he was killed. After Jill's passage by the Raccoon Police Station, his zombified body will be gone.

The man being eaten.

The man "waking up" as a zombie. 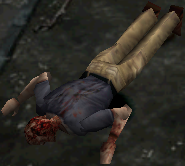 A close-up of his corpse.
Add a photo to this gallery

After Jill witness the death of the civilian in the Jack Street's alley, when you're passing the first time by the backdoor of Bar Jack, you'll hear the sound of shots coming from the playground. Going to the playground, you'll see Brad Vickers, a former pilot of the Special Tactics and Rescue Service (S.T.A.R.S.), shooting down a zombie. After this, he'll turn back and run entering the Bar Jack by its back door.

Sometimes, the zombie who Brad shot barely survives his wounds and rises to attack Jill.

Brad shooting down the zombie.

Brad running.
Add a photo to this gallery

After leaving the Warehouse, if you re-enter on the Store area of the Fisson Street by the backdoor of Bar Jack or by the Y-shaped alley, Jill will hear a woman screaming "Help!" in despair.

More forward, you will see a civilian (maybe a teenager) running away from two zombies that are chasing her, and she enters the passage to Warehouse. Following her, when you approach the passage's entrance, it's possible to hear her screaming "No...!" and the scream is abruptly interrupted. Entering the passage, you will find her already dead beside a zombie, suggesting it killed her. No matter how long the player remains in the area she will not awaken as a zombie, there's a template for female zombies very similar to her, but with notable differences (for example, the zombie template is with two shoes, she's with only one).

There's no way to save her: it's impossible reach her in time before she enter on the passage because she is faster than Jill. Also, if you go to the Fission Street passing by the Y-shaped alley (who lead direct to the Warehouse's front) or kill the two zombies who surround her in the first time you pass this area, when you approach to the front of the Warehouse passage, you will hear hers last scream and she is found dead beside the zombie in the same manner. You can end the game without seeing this scene, however, by doing that you can't access the Warehouse to get the Dario's memo and the gunpower in the container where Dario Rosso locked himself.

The woman turn back and run from them.

Jill avoiding the two zombies and following the woman. (click to zoom)

Entering on the passage, she's found dead beside a zombie.

Close-up of her (alive)

O close-up of her corpse. 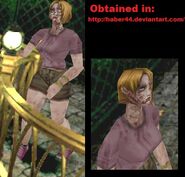 The template of zombies similar to her.
Add a photo to this gallery

When Jill enters the Parking lot road (there are some zombie dogs lurking around) for the first time, she will hear distant gunshots and a man screaming "No!". Both the voice and the gunshots stop shortly after with the sound of bites and meat being eaten, suggesting the man has been killed.

Going more forward, there's a crashed bus in the front of the Parking lot, and beside this bus, it's possibly see a zombie dog in special leaving a Umbrella Biohazard Countermeasure Service (UBCS) mercenary's corpse (who died being bitten on the neck) as the sound of bites stop, suggesting that he was the one shooting before being killed by the dog, but there's not confirmation of this. Unlike the two others, the UBCS' texture is not a template for zombies in the game and re-appear only in the construction area as another dead UBCS mercenary apparently killed by Drain Deimos.

Close-up of the dead mercenary.
Add a photo to this gallery

UBCS mercenary Carlos Oliveira's very first appearance during the game's survivor encounter. When passing the first time by the Restaurant passage, you'll hear someone shout in rage "Dawn!" (or "Scum!", because of the distance, it's not possible hear clearly) followed by the sound of shots. If you go to right quickly (in the patch to the Grill 13 restaurant), you can brief see Carlos in distance killing a zombie close to him with his handgun. After that, he (who presumably haven't noticed Jill) turn back and run, it's possible hear his footsteps distancing away for some seconds who are interrupted by the sound of a door beating. It's impossible turn the corner fast enough and see where Carlos go, but the door's sound is very similar to the one from Grill 13th's front entrance, strongly suggesting that he entered in the restaurant.

It's impossible reach Carlos before he turn back'n run, apparently it's also impossible help him to kill the zombie as he do it quickly with three shots on the head. 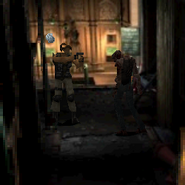 A close-up of the scene.
Add a photo to this gallery

After Jill meet the UBCS team in the Tram, when you're passing again by the corridors of the Shopping district alley, you'll see Carlos screaming and running from a small group of zombies pursuing him and leaving the area going to the Flower Street.

To spare ammo, you may let the zombies follow him and go by the Grill 13's back entrance.

The dead mercenary holding the girl's corpse.
Add a photo to this gallery
Retrieved from "https://residentevil.fandom.com/wiki/List_of_survivor_encounters_in_Resident_Evil_3:_Nemesis?oldid=723252"
Community content is available under CC-BY-SA unless otherwise noted.