Live Selection (ライブセレクション Live Selection) is a feature exclusive to Resident Evil 3: Nemesis in which the player must select an action within a cutscene to continue the storyline. Either option will advance the story, but will affect the progression of events later on. The quick time events of later games would abandon the multiple options and focus strictly on the player's survival.

The player will be asked to make a decision at least nine times during the course of the game. If the player selects nothing before the time is up, the game will force a choice usually at the consequence of extra damage.

The Nemesis-T Type injures Brad Vickers in front of the Raccoon Police Station before turning on Jill.

If Jill stays to fight, the S.T.A.R.S. Card can be obtained early from Brad's body to get faster access to the computer in the main hall. Nemesis can be defeated, and if playing on Hard Mode, this will cause him to drop the first of the seven items. Nemesis can also be avoided, making it possible to pick up Brad's S.T.A.R.S. Card and run for the doors.

Entering the police station avoids the fight at the cost of having to find Jill's S.T.A.R.S. card in the building to gain access to the computer.

If neither decision is made in time, Nemesis will attack Jill, weakening her before she has to make the decision herself.

Nemesis confronts Jill and Carlos Oliveira at the Restaurant. This occurs if Jill explores the restaurant before The Raccoon Press.

Running into the basement will cause Nemesis to burst the water pipes and flood the corridor. Escape is possible through a ventilation shaft at the other end of the basement, which is out of view. Jill and Carlos will talk for a little while, and zombies will interrupt the conversation. Nemesis will stalk Jill through the area, even inside the Raccoon Press. Also, this decision affects the story, causing Jill to meet Carlos at the Sales Office and Nikolai Zinoviev at the Gas station. If instead the player decides to leave the basement via the ladder, they will have to face Nemesis in the restaurant, although they can flee without defeating him. It is impossible to drown: waiting for too long inside the basement will simply trigger a cutscene where Jill and Carlos both climb up the ladder. The game will end if either of them dies while fighting Nemesis. If the pair doesn't escape through the ventilation shaft, then Jill will later meet Carlos at the Gas station and Nikolai Zinoviev at the Sales Office.

Hiding inside the kitchen has Jill throw an oil lamp at Nemesis, knocking him out and buying her and Carlos enough time to flee. He will also drop an item on Hard Mode. After a few seconds have passed, Nemesis will get up and stalk Jill and Carlos: if either of them dies, the game is over. This decision ensures Carlos will be encountered at the Gas station, and Nikolai at the Sales Office.

If neither decision is made, Jill and Carlos will have to face Nemesis immediately, although they don't actually have to defeat him. Like before, the game will end if either of them dies while fighting Nemesis. It also means Jill will later meet Carlos at the Gas station and Nikolai Zinoviev at the Sales Office.

Nemesis confronts Jill and Carlos at The Raccoon Press. This event happens if Jill visits this location before the restaurant.

The choice has more or less the same consequences as the one in the Grill 13.

Hiding in the back causes Nemesis to be knocked out by an explosion in an adjacent room, making it easy to obtain an item from him if playing on Hard Mode. After a few seconds have passed, Nemesis will get up and stalk Jill and Carlos: if either of them dies, the game is over. This decision ensures Carlos will be encountered at the Gas station, and Nikolai at the Sales Office.

Jumping out of the window makes it so that Jill and Carlos won't fight Nemesis, and the player also gets access to a back street that cannot be accessed otherwise, and which contains two red herbs. This decision ensures Carlos will be encountered at the Sales Office, and Nikolai at the Gas station.

If neither decision is made, Jill and Carlos will have to face Nemesis immediately, although they don't actually have to defeat him. Like before, the game will end if either of them dies while fighting Nemesis. It also means Jill will later meet Carlos at the Gas station and Nikolai Zinoviev at the Sales Office.

After finding the fuse for the cable car, or the Magnum/Grenade Launcher, zombies try to break down the door to get Jill.

If Jill heads to the emergency exit, Nemesis will appear outside, but only if Jill hasn't visited the Sales Office and obtained the Oil Additive yet. He will kill some of the zombies that are in the way before coming down to fight Jill. He will use 2 missiles from his Rocket Launcher, so he will be left with just 3 remaining to use to attack Jill, making the battle somewhat easier because of this. Nemesis will stalk Jill even in the Substation if she decides to go back inside to get the Magnum / Grenade Launcher.

If the output is increased, the zombies knocking on the fence will get a fatal electric shock. This overloads the station completely, changing the values of the electricity machine and making the puzzle of the shutters a bit different. It is still possible to obtain the Magnum / Grenade Launcher after opening the remaining shutter and looking for it in the room. Making this decision ensures that Nemesis won't show up, even if Jill hasn't yet found the Oil Additive.

If neither decision is made, the zombies will break in and have to be killed in order to escape. This will also make Nemesis appear outside if Jill hasn't been to the Sales Office.

An earthquake occurs on the way back to the cable car after obtaining the Oil Additive. Jill almost falls down the hole, and crates from inside a van start to slide toward her.

Both options see Jill unharmed and there is no story significance with this choice. The only difference is that jumping down gains access to a small underground passage which has sliding worms. Climbing the ladder at the end returns the player to the street outside the garage by a dead UBCS soldier.

If neither decision is made, Jill will be hit by the crates, causing damage and forcing her down into the underground passage.

After Mikhail's sacrifice, the cable car is about to be derailed due to the explosion.

If Jill jumps out of the window, she will enter the clock tower through the back door, Carlos will give to Jill some freeze rounds for the Grenade Launcher in the main hall, and the fight with Nemesis after the clock tower bell is rung sees him fully armed with his Rocket Launcher.

If Jill uses the emergency brake she will enter the tower from the front courtyard. Carlos will not give Jill ammo, but will appear at the start of the Nemesis fight and destroy his rocket launcher before being knocked out, making Nemesis unable to use it.

If neither decision is made, the cable car will crash and Jill will be flung into the clock tower front courtyard, suffering damage from the crash. The story will play out as if Jill used the emergency brake.

Nemesis confronts Jill at the balcony of the clock tower after solving the music box puzzle.

If Jill uses the light, Nemesis will be blinded and pushed from the balcony by Jill. He won't stalk her, but she won't get an item from him either.

If Jill uses the cord, an electric shock will knock Nemesis unconscious, allowing Jill to get an item from him without having to fight. However, he will stalk her when she leaves the balcony.

If neither decision is made, Jill has to either fight Nemesis on the balcony or flee.

Nemesis confronts Jill on an old bridge at the entrance of the Disused Plant.

This choice directly impacts the ending of the game.

If Nemesis is pushed off the bridge, Jill enters the factory on the top floor and meets Carlos in the safe room. Nikolai will be killed by Nemesis in the end, and Jill and Carlos will take the chopper to leave the city before it is destroyed.

If Jill jumps off, she will enter the factory via the sewers where she's rescued from zombies by Carlos. Nikolai will steal the remaining chopper, but Jill and Carlos will be saved by Barry Burton. It should be noted, that this choice is canon.

If neither decision is made, Nemesis will hit Jill and send her into the rocks below, causing damage. The story will play out as if Jill jumped off the bridge.

This live selection only occurs if Jill jumped or was pushed off the bridge. Nikolai appears in a helicopter and attacks Jill with the helicopter machine guns.

The first option will make Jill try to reason with Nikolai unsuccessfully before he will eventually fly away.

The other option sees Jill fight Nikolai until the helicopter is destroyed, killing him in the process. Alternatively, Jill can take cover until Nikolai bids her farewell and flies away.

If neither decision is made, Nikolai will fire a rocket at Jill, causing damage before the fight happens.

After destroying Nemesis in his third and final form, his remnants will still try to hinder Jill's escape.

Choosing to exterminate the monster, Jill takes revenge on Nemesis by destroying him once and for all. Time does not stand still during this cutscene. If done with the missile close to hitting Raccoon City, the game will end.

The other option causes Jill to leave the room immediately. Nemesis dies either to his injuries or the missile strike.

If neither decision is made, Nemesis will successfully attack Jill one last time, poisoning her, before he dies. 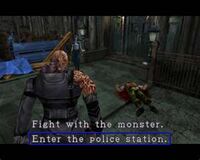 Encountering Nemesis for the first time.
Add a photo to this gallery
Retrieved from "https://residentevil.fandom.com/wiki/Live_Selection?oldid=815725"
Community content is available under CC-BY-SA unless otherwise noted.