The "living doll" (tentative name) was an enemy which appeared in the E3 2003 demo for Resident Evil 4, then going through its "Hallucination" stage of development. Leon S. Kennedy was set to experience hallucinations and be attacked by them. There were at least two versions of the doll. One resembled a bloodied baby with red stains on the right side of its torso and over its right eye as well as misshapen arms and legs. The other resembled a blonde china doll. 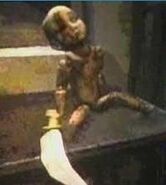 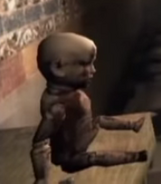 Another example of a doll.
Add a photo to this gallery

Retrieved from "https://residentevil.fandom.com/wiki/Living_doll?oldid=465430"
Community content is available under CC-BY-SA unless otherwise noted.