Lloyd Stewart was an employee of the Raccoon Zoo.

After the t-Virus contaminated Raccoon City's drinking water, the animals mutated and escaped on Thursday 24 September 1998. Lloyd ran into the inner office and hid.

In "Wild Things", Lloyd as an NPC hands over Shotgun Rounds or a First Aid Spray if the player has already spoken to Austin Taylor at the observation deck. Completing the scenario unlocks Lloyd and Patrick Reyes as a set, priced at 3000 points in the Collection menu.

Lloyd is a David-type character. Being such, he has access to David King's tool kit and abilities. This means he is able to fire handguns and magnums with one hand and has a knife combo. It also means he can make combo weapons for himself and his partners.

He starts with a mixed Green and Blue herb as his extra item. 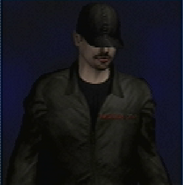 Lloyd in the collection menu
Add a photo to this gallery

Retrieved from "https://residentevil.fandom.com/wiki/Lloyd_Stewart?oldid=695241"
Community content is available under CC-BY-SA unless otherwise noted.