Los Iluminados (IPA: /los ilumiˈnados/, Spanish, meaning "The Enlightened") is a neopagan religion which emerged in a mountainous region of Spain around the Millennium, known for its worship of Plagas, a genus of parasitic arthropod. Los Iluminados sees itself as the continuation of an ancient primal religion native to the region, though there is no actual evidence of such a link. The group shares its name with an illegal paramilitary made up of its cult followers. This paramilitary was severely crippled in 2004 during an American-led counter-terror operation, though both the religion and terror group survived.

Los Iluminados' mythology believes its followers are a continuation of an ancient primal religion that existed in Iberia thousands of years ago, which revolved around Plaga-worship. Evidence of this religion can be found in the cave art made by an island-residing culture. This religion continued to exist into the Early Modern Period, where it became seen as a threat to Catholic orthodoxy in the region, and its followers were massacred in a crusade led by Salazar, a zealous nobleman. The Plagas and surviving followers were then sealed within the remains of an ancient underground city and left to die. Ruling from a nearby castle, Salazar took on the role of Castellan and ensured the continuation of Catholicism in the region.[1][excerpt 1]

Los Iluminados' true origins lie in the 1990s with Osmund Saddler, who became aware of the Plagas through unknown means. Taking the guise of Prophet, Saddler developed Los Iluminados as a religion to ensure the loyalty of converts who could then be implanted with the Plaga parasites. Among the early converts was Ramon Salazar, a descendant of the crusader lord, who was made to atone for the perceived sins of his ancestors so he would re-open the caverns.[2] Eventually, Saddler was successful in occupying Salazar Castle and using it as a base for his cult.

When Salazar released the seal to the underground ruins, the Plagas were found to have died long ago. However, in their desiccated remains lay spores, which were still alive. These were confirmed to exist sometime later when several miners fell sick sometime after excavation began, and were in a state of regenerating new, complete bodies. Using these Plagas, Saddler perfected the ability to reproduce the organism and took to implanting Plaga eggs into new hosts.[3]

The cult's followers were soon implanted with Plagas along with much of the local population who had joined the cult. Saddler himself was implanted with a Dominant species Plaga and as such has direct control over the others, using lieutenants with similarly augmented Plagas to monitor and direct the Ganados on the ground.

Sometime before Autumn 2004, American agent Jack Krauser, while secretly working for Albert Wesker, arrived at the village in search of the parasite. He was later used to kidnap Ashley Graham, daughter of U.S. President Graham, as part of an Iluminados plot to do no less than take over the entire world by infecting Ashley and returning her to her father with the aim of influencing the United States' executive branch. Saddler noted, however, that in order to take over the US, the parasites would need to spread to those with influence over the President's decisions - Congress, the Department of Justice, military government agencies and large private companies.[4][5]

Plan B was to use Saddler's paramilitary to infiltrate the United States and sow discord from within, likely gaining converts to Los Iluminados as they went. Ada Wong, an agent for an unnamed organisation and subordinate to Wesker, destabilized "Plan B" when she sank the militia's warship docked within the island.[6]

The remnants of the Los Iluminados remained active in Spain for years following the 2004 raid. Although, they were greatly hindered by the death of Saddler and the condemnation of the wider world. The Spanish government enacted heavy sanctions, sending in a squad to exterminate those who were determined to have been carrying the parasite and imposed a quarantine against the Iluminados homestead due to the threat posed by wild Plaga, which continued to infect many of those who returned home.[7]

While many of the Iluminados continued to live in relative peace under lockdown, being self-reliant and seldom disturbed by outsiders,[8] A small devout sect chose instead to seek revenge against Kennedy and the United States government. Patricio, who had spent several years living in the United States as a mole for American intelligence organizations (such as the Division of Security Operations), was contacted by The Family in 2014. Having been under heavy scrutiny and investigation by Kennedy in the fallout of the 2012-2013 Global Bioterrorist Attacks, The Family provided Patricio and the Iluminados enough information to stage a bioterror attack in Washington, D.C. during the investigation of Maryland senator Steven Air, leading to the death of an entire metropolitan S.W.A.T team and three government employees in a carbombing.[9]

Not long after, the Iluminados sect allied themselves with arms dealer, Glenn Arias, assisting him by providing specimens of Plaga for use in development of the A-Virus which he planned to use in a bioterror attack on New York City. Fearing for the safety of his wife and daughter, Patricio tracked down Kennedy to a hotel for help. Patricio was shot in an attack on the hotel by one of Arias' agents, Diego Gomez, and died before he could give sufficient information. Arias' attack was successful, though the surviving victims were cured when a vaccine was procured and distributed by Chris Redfield and Rebecca Chambers.[10]

Followers of Los Iluminados regularly congregated in dedicated places of worship. Several are known to have existed in the area. In the village, an existing chapel was converted for rituals, and the ringing of its bells was a symbolic call to worship. A cave on the other side of the quarry was also used for the purpose of human sacrifice.

The cult also operated a monastic order, based within Salazar Castle. Monks, dubbed "Cultists", were clothed in black, purple and red robes identifying rank, with some wearing metal masks, or masks made from goat skulls. Among these Ganados, ritualistic tattooing was common, though their heads were normally concealed. The monks are known to have been all bald and of pale skin, but how much is to do with the parasites is uncertain. These monks also held their own rituals, and would pray before a blood-stained knife with the cultic symbol decorated on the hilt. 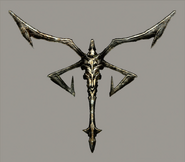 The insignia as seen in the 2023 remake.