Lottie was a teddy bear owned by Natalia Korda, which she identified as female. It was given to her by Neil Fisher after the Terragrigia Panic

Natalia is seen carrying Lottie when she is found by Claire and Moira during Episode 3: Judgment. She later loses the bear and finds it destroyed by Alex Wesker in Episode 4: Metamorphosis.

In the post-credit cutscene, Lottie can be seen in Natalia's room, suggesting the Burtons had found a replacement for Natalia.

During Extra Episode: Little Miss, Natalia and Dark Natalia (Alex Wesker's Manifestation/Consciousness in Natalia) go on a search to find Lottie who leaves several clues to her whereabouts through postcards. Natalia describes Lottie as being "the only good in her life" and one of her only friends. She is desperate in the search for Lottie as she doesn't want to lose her like she lost her parents.

Upon finding Lottie, the bear uncharacteristically tells Natalia "Gosh-arooney, you little BITCH! I was supposed to win this game of tug-o-war!" with her voice changing near the end, then she laughs maniacally before falling limp and Natalia is in shock to witness this behaviour, with Dark Natalia then proceeding to pick her up and telling Natalia: "But there's still plenty of time to get under your skin, next time you won't see me coming", implying that Lottie here was a manifestation of Dark Natalia

Lottie as seen in the first of her postcards during the Extra Episode.

Lottie's cameo in the ending cutscene of the game. 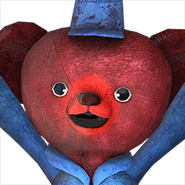