Lucas Baker (ルーカス・ベイカー, Rūkasu Beikā?) was a resident of the Baker ranch, located in Dulvey, Louisiana. He was the son of Jack and Marguerite Baker, the older brother of Zoe Baker, and the nephew of Joe Baker.

Lucas was apparently a "bad seed", but despite his unruly ways, he was a gifted inventor and won several awards for his work which he displayed in his room. He also mentioned having gotten a jigsaw puzzle from his mom as a reward for going to the hospital for a head scan.

It can be presumed that he was already mentally unstable.[3] He also chronicled the time when he trapped one of his childhood bullies, Oliver, in the attic and sealed it with a remote, leaving him to die of thirst and starvation. He then fused the remote with one of his trophies, disguising it as a lamp to prevent Zoe from getting into the attic.

By 2014, he and his sister were still living at their parents' house. His anti-social nature led him to constantly fall out and argue with his family, resulting in him creating a "Fuck You" list on his laptop to log these events and vent his frustrations. After a violent storm hit the surrounding area, Lucas went outside and found a shipwrecked tanker. Telling his father about it, they went to investigate but found only one survivor; Mia Winters. Lucas then brought Mia in.

Jack eventually returned with a girl named Eveline, as Lucas watched. He was irritated that Marguerite let Eveline have his old bedroom, although he nonetheless consented. After Eveline had woken up, Lucas wound up unconscious, and eventually was dragged by Jack to "meet Eveline" where she gave him her "gift", with him telling his father to not do it in sheer terror.

Eveline, who had the ability to produce a mold substance and control people she came into physical contact with, managed to take control of the Baker family, Lucas included, grooming them and Mia to become her ideal family. Along with his father and mother, Lucas gained regenerative abilities, even being able to grow back his hand after Jack cut it off. However, Lucas was met by agents working for The Connections, who provided him with a serum that stopped Eveline from controlling him. In exchange, Lucas spied on his family for them. During his time of possession, Lucas also began building elaborate puzzles within the family's old barn, some of which were certain to cause the death of the victim, even when solved. He was also given the role of lead researcher, much to the dismay of another researcher, who had a degree in microbiology from Stanford University. According to the researcher's note, he would commonly make test subjects fight each other and perform pointless autopsies. He eventually betrayed all researchers of the Connections and murdered them by locking them inside a room where they would be killed by Molded, in order to take Eveline's Mold for himself.

After the Sewer Gators arrived in the Dulvey Haunted House and were confronted by Jack Baker, Lucas took Clancy Jarvis, the sole survivor, and forced him and Hoffman, another survivor, to play 21, a card game of Lucas's design where the loser would suffer painful consequences. Clancy soon proved himself to be the better card player between himself and Hoffman, leading the latter's eventful death. Lucas later put him into the "Party Room" within the re-purposed barn. After removing his bindings, he taunted Clancy into solving the puzzle, putting a candle on a cake, promising him freedom if he did. However, unknown to Clancy, Lucas had rigged the puzzle to require a winder, which would spill oil onto the floor. Completing the puzzle, the cake exploded and set fire to the room. Unable to extinguish the flames or escape, Clancy died as a result. Shortly after the flames died out, Lucas came into the room to retrieve the camera, taunting Clancy, even after his death.

When Ethan Winters, Mia's husband, was captured by his father, Lucas attended "dinner" with his family to welcome him to their group, continually throwing food at him whilst he was unconscious. Eventually, Lucas threw his dinner plate at him, to which Jack responded by slicing off Lucas' hand, causing the latter to shout "not again!", signifying that this wasn't the first time it had happened.[4] When a police officer arrived and knocked at the door, Lucas and Jack disappeared, possibly to either hide from or murder him.

Whilst Ethan was investigating the old family house, he found Mia in the basement. However, before he could find a way to her, Lucas appeared behind her and took her hostage. During Ethan's investigation of the old house and fight with Marguerite, Lucas placed keycards around the family's house and the key to access these rooms within the neck of the now deceased deputy. He later captured Zoe in the family trailer as she retrieved an ingredient to a cure for Eveline's mold, leaving the severed molded head of the officer in the fridge with a note attached to it, reading "the pig is in the dissection room, bitch!". As Ethan arrived at the trailer after collecting the ingredient, Lucas called its phone and, when Ethan answered it, taunted him, telling him about his capture of Zoe and sending him to collect key cards that would allow him access to the barn. Lucas also filmed a short video, explaining to Ethan how he wants things to stay the way they are, setting a television up to play it.

As Ethan progressed through the barn, foiling his traps and defeating the Molded, Lucas would continually mock and tease him, getting on Ethan's nerves. Once he made it to the Party room, Ethan completed the puzzle without releasing the oil. Angered, Lucas dropped a stick of dynamite in the room to kill Ethan, but it was instead used by the latter to escape. Furious at this twist of events, Lucas fled. He taunted him one last time via video recording, suggesting that he had more surprises in store for Ethan, but was not seen again afterward though his IED traps are encountered when Ethan later entered the salt mines. Blue Umbrella's special forces team survey the Baker Ranch and Chris Redfield reports that Lucas was in the salt mines and that he was going to look for him. After helping Ethan kill Eveline, Chris entered the salt mines in pursuit of Lucas.

At an undisclosed point in time, Lucas betrayed the Connections scientists working with him, feeding them all to the Molded before covering the incident up as an accident. With Umbrella in hot pursuit and a third party in need of the E-Series data, Lucas commenced a final effort to complete his transactions and cut ties with his former business partners. He captured three Umbrella soldiers working under Chris in order to use them as bait. When Chris attempted to save the first of these captured operatives, Lucas, under the guise of another operative, attached a plastic explosive to Chris's arm before detonating a similar bomb on his hostage's neck. Lucas proceeded to release E-Type spores throughout the mines as a further means of trying to kill Chris. He later decapitated the second captive soldier with a buzz saw and blew the final operative's head off with another remote bomb. Mocking Chris, he then activated the bomb he had placed on his arm, although Chris was able to remove it in time by freezing it with liquid nitrogen.

Lucas eventually activates the self-destruct mode of the salt mine in a final effort to kill Chris. Thinking Chris was dead from the explosion, he sent an email about Eveline's data to the unknown third party before being chased by Chris one final time. At the end of the chase, Lucas ambushes Chris with a knife in an attempt to kill him, only to be shot in the chest in the process. In the process, this triggers both Lucas's grotesque mutation and his final battle with Chris. After being fatally damaged, the mutated Lucas collapsed on the floor and was decapitated by a blast from Chris's shotgun. The unidentified buyer would never receive the email Lucas was preparing to send them, as Chris destroyed Lucas' computer.

In life, Lucas was a sadistic and mad individual with a cruel superiority streak and a willingness to derive pain from his victims for fun and enjoyment. Though ecstatic and headstrong, as well as intelligent and crafty, he was more than willing to engage in less than wholesome activities out of indulgence and gain, be it from setting up games with severe life threatening stakes on unwilling victims to engaging in the shadowy and illegal affairs of the biological weapons market trade. As aforementioned, he harbors little sympathy to others, including his own family, due to believing himself better and "superior" by his brains and smarts, and shows cases of severe megalomania and power lust, showcasing immense pleasure from manipulating odds and stakes to inevitable rigged victory on his end, to immense frustration and desperation when any case of his activities does not end as desired. Some of the madness and mental instability on this end is also believed to stem from a neurological disorder since birth.

In the vein of Brian Irons, he bares the signs of a psychopathic serial killer, but with more in line with that of a mad scientist than a sociopathic advantageous stalker. Like with any serial killer, his preferred modus operandi is that of his "birthday game room", as believed to be born when he essentially kidnapped and starved to death a childhood bully in the attic up to his room.

Mutated Lucas is encountered as the ending boss fight of the "Not A Hero" scenario. He will start the fight by falling from the lump in the ceiling. He is invulnerable during the initial recovery animation and when he roars. Lucas' head is the only weak spot that he has. The player must continually shoot it until he reaches his damage threshold and goes into a state of shock. During this state of shock, his chest weak spot is exposed, enabling the player to do increased damage to him. Inflicting the damage equivalent to 5-6 RAMROD shots on his chest should be enough to put him into his second phase, where he will jump on top of the structure in the middle of the room. He will start to complain about head trauma and will undergo additional mutations to his arms as well as envelop the entire room in spores that will drain Chris' oxygen tank. The only way to regain oxygen is by using the 2 oxygen tanks that are mounted on the wall. They will be lit with a green light. The same process must be repeated, shoot his head until he goes into a state of shock, then shoot his chest. Incendiary grenades are a guaranteed stun so long as he is not in any kind of flinch animation. If Lucas is deflected, he will be stunned for a few seconds, providing a window to inflict damage.

Lucas Baker about to throw his plate at Ethan Winters.

Lucas' arm being cut off, shown in a Famitsu article.

Clancy is bound and dragged over by Lucas 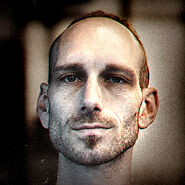 Lucas attacks Chris with a knife.

Retrieved from "https://residentevil.fandom.com/wiki/Lucas_Baker?oldid=707647"
Community content is available under CC-BY-SA unless otherwise noted.